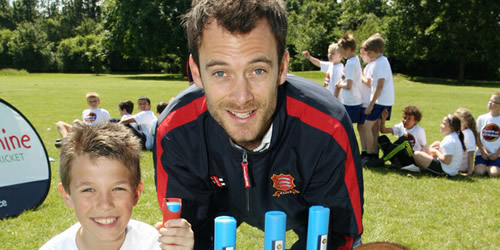 Having begun the County Championship campaign with a thumping innings victory over Gloucestershire, the 2012 county season looked like it was shaping up to be a rosy one for Essex.

With a strong squad consisting of a well-balanced blend of youth and experience, the Essex faithful would have been hopeful of seeing their side gain promotion from Division Two.

However, they have struggled to live up to expectations, recording just one victory across all competitions since that opening win, and Essex now find themselves languishing in the lower echelons of both their CB40 group and the second tier of the County Championship.

As they try to get their season back on track, James Foster says the Friends Life t20 couldn’t have come at a better time for his side and the Eagles skipper is optimistic they can challenge for silverware in the shortest format. “It is a tournament that we are yet to win but we believe we can win,” says Foster. “The most important thing to think about at the moment is qualifying from a very difficult group.

“The Twenty20 campaign is rated highly by all the counties. I think, in general, the Twenty20 skills over the last few years have improved consistently. New shots, new options, the way bowlers are bowling and also fielding have all added to the game.

“We don’t have any particular style when it comes to Twenty20, we just believe that we have to adapt to whatever is thrown at us. The size of the ground, the type of wicket, whether it is flat, slow or turning; you always have to adapt.”

Essex will look to utilise a crop of promising young cricketers in their bid to compete for honours and Foster insists the future looks very bright at Chelmsford, with several academy products forcing their way into the first team of late.

“We’ve got Tymal Mills, who is 19 years old and an exciting quick bowler. Adam Wheater is probably going to feature too now that Ravi Bopara is away with the England set-up and the likes of young leg spinner Tom Craddock might get a game depending on the wicket and the conditions.”

Arguably the most exciting talent of the lot is young keeper-batsman Ben Foakes. Born and bred in Essex, the 19-year-old has impressed pundits and fans alike and, having already struck two centuries for England under 19, he came agonisingly close to repeating the feat on his Championship debut, when he hit an impressive 93 against Leicestershire.

Foster is full of praise for the young man and compared him to Essex’s best batsman for a generation. “He is a serious talent; a very exciting young player. He is a very relaxed character and doesn’t seem to get flustered. He is like a right-handed Alastair Cook with the way he goes about his business.

“He is very calm, that’s why I compare him to Cooky. Obviously Cooky has ended up being one of the best batters in the world at the moment, so I am not trying to jump the gun too much here, but he has something about him, with the way he plays and his clear-thinking. That is the main similarity between him and Cooky. Of course, they are two good-looking lads as well!”

With youngsters of the raw talent of Foakes among the ranks and seasoned campaigners such as Owais Shah, Ryan ten Doeschate and James Franklin all boasting a wealth of Twenty20 experience, Foster is hopeful the Friends Life t20 can propel Essex on to bigger and better things this season and give the club a real chance to shine.

Chance to Shine ambassador James Foster was helping to promote the ‘play hard, play fair’ message of MCC Spirit of Cricket. Chance to Shine has brought cricket to over 1 million state schoolchildren. The programme costs £5million, or £15 per child, to run each year. To make a donation visit www.chancetoshine.org