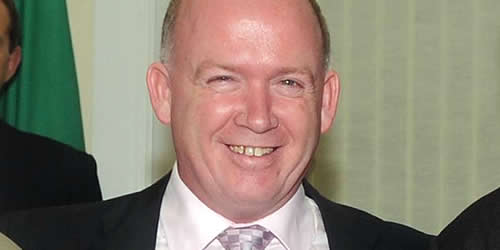 Declan Kidney looks set to be without Mike Ross on Saturday Photo: The Labour Party, via Flickr

Ireland look set to be without prop Mike Ross when their first Test against New Zealand gets under way in Auckland on Saturday.

Ross is one of a trio of Leinster forwards who are facing a race against time to prove their fitness ahead of taking on the All Blacks.

Flanker Sean O’Brien and prop Cian Healy look set to shake off their injury concerns but the 32-year-old Ross, who started every game for Ireland in this year’s Six Nations, is still struggling with a hamstring tear picked up in the Pro12 final defeat to Ospreys.

“Mike is rehabbing from his hamstring tear, it is going well but he hasn’t trained fully and remains in some doubt ahead of the weekend,” said Ireland team manager Mike Kearney.

“Cian trained fully and is good to go. Sean O’Brien is continuing to rehabilitate well and he accelerated his rehab this morning.

“We are hopeful that he will be available for selection at the weekend.”

Ireland have already had Paul O’Connell ruled out for the tour after failing to shake off a knee problem and will be hoping Ross can prove himself ahead of taking on the World Cup winners.

But despite their concerns assistant coach Les Kiss remains confident that his side will be up to the challenge of taking on the All Blacks in Auckland, a place where the home side have not lost since 1994.

“From the squad New Zealand have picked it is going to be a fantastic series,” said Kiss.

“We’re playing the world champions, the best in the world bar none. We expect them to throw everything at us.

“I know that they are very proud at what they have achieved in Eden Park. I know Australia have spoken up in recent times about going there and breaking that there but [New Zealand] just keep turning up at that ground and nailing it.”

Sail for Gold 2012: Weymouth and Portland hit by Olympic fever