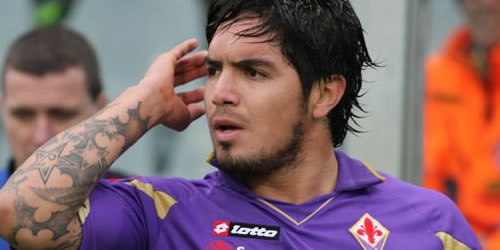 The 28-year-old made 24 appearances in Serie A for the Viola last season but the Peru international is now being linked with a move away from the Florence outfit.

Vargas, who joined Fiorentina in 2008, is a reported target for Liverpool, with the Reds set to miss out on Iceland midfielder Gylfi Sigurdsson – the former Swansea City midfielder is reportedly on the verge of joining Tottenham Hotspur.

But Rodgers faces competition from La Liga’s cash-rich Malaga for Vargas – and the player’s agent has hinted that the chance to play in the Champions League could be a decisive factor in any potential transfer.

“There is the possibility that he [Vargas] will leave Fiorentina,” Jorge Cyterszpiler told tuttomercatoweb.com.

“But at this time it’s just a rumour and there is nothing official. He didn’t have the best best of seasons and he needs to make up for it next season.

“Liverpool is an option, but there is also Malaga that has the fascination of playing in next season’s Champions League.

“Does he have a preference with regards to playing the Premier League or the Primera Liga? Vargas likes both leagues as well as the Serie A.”