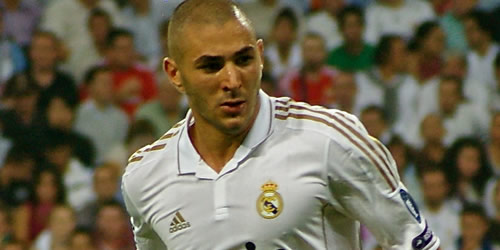 Karim Benzema has insisted he is happy at Real Madrid, despite Manchester United’s attempts to sign the French striker for the “past three or four seasons”.

The 24-year-old was heavily linked with a move to the Red Devils before he eventually opted to switch from Lyon to Real Madrid in 2009.

Benzema has scored 67 goals in 133 appearances for the La Liga champions and the 2011 French Player of the Year says he is feeling settled in the Spanish capital.

“The rumours about my future are common, every summer it’s the same that I will be going to this club and that club,” Benzema told the Sun on Sunday.

“But I am very happy at Real Madrid and the thought about leaving has never crossed my mind. I know Manchester United have tried to sign me for the past three or four seasons.

“When I was at Lyon they and a number of other English clubs wanted me but could not agree terms with Lyon. Besides, I wanted to go to Spain and I can honestly say I have never regretted that decision.

“I’m still young and I have a contract at Madrid until 2015. I still want to achieve things at the club. I have had a taste of success after winning the Spanish title but I want more.”

Benzema, who is set to face England in France’s Euro 2012 opener on Monday, refused to rule out a move to the Premier League further down the line.

“I would never say never about coming to England and, to be honest, I have no real preference in terms of teams,” added Benzema.

“But that is a long way in the future, not something I would even consider at the moment.”