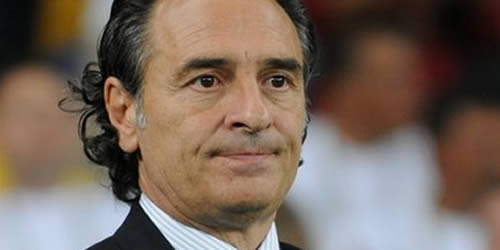 Cesare Prandelli's men were in fine form against Germany Photo: Football.ua, via Wikimedia

Mario Balotelli struck twice in the first half to inspire Italy to a 2-1 victory over Germany and book their place in the Euro 2012 final against defending champions Spain in Kiev on Sunday.

The Manchester City striker and Juventus midfielder Andrea Pirlo were the standout performers as Cesare Prandelli’s side caused a shock in the second semi-final, and the 21-year-old’s exploits received plenty of praise from his colleagues on Twitter.

Here are some of our favourite Tweets, in chronological order.

1min: Queens Park Rangers captain Joey Barton ‏(@Joey7Barton) is backing Joachim Low’s side: “Got to fancy the German machine tonight. I can’t see beyond them. They will man mark Andrea Pirlo mark my words, he will be shackled. If you stop Pirlo then you as good as stop Italy.”

1min: Newcastle United defender Danny Simpson ‏(@dannysimpson) gives his prediction: “Germany 1-0 and Mario Gomez to score! What do you think?”

20mins: Fabrice Muamba (‏@fmuamba) sees it as a challenge for the fancied German side: “Wow. This is big question for Germany to see how they can handle being a goal down.”

20mins: Leicester City goalkeeper Kasper Schmeichel (‏@kschmeichel1) heaps praise on Antonio Cassano for the cross which resulted in Balotelli’s first goal: “What a ball in for Ballotelli! This makes it very interesting. #ItaliansCanDefend”

30mins: Tottenham Hotspur midfielder Jermaine Jenas (‏@jjenas8) disagrees with some of the refereeing decisions: “Seriously another referee that needs his whistle taking off him!!!”

35mins: Birmingham City goalkeeper Ben Foster ‏(@BenFoster) is stunned by Balotelli’s second goal: “Don’t care if you like #Balotelli or not but wow!”

Half-time: Manchester United defender Rio Ferdinand ‏(@rioferdy5) believes Italy could have beaten England by more if they had been clinical: “Germany 0-2 Italy…totally surprised me….saying that if Italy had converted their chances against us it would have been much the same!”

Half-time: TV presenter Eamonn Holmes ‏(@EamonnHolmes) doesn’t want England supporters to start getting smug: “How many people are rethinking the England performance now ? Maybe not as bad as it seemed on the night …..nah – it was still pants!”

60mins: Kasper Schmeichel ‏(@kschmeichel1) praises Buffon for a great save from a dangerous Germany free-kick: “Great save Buffon and very important!!! #class”

82mins: Former Tottenham midfielder Rohan Ricketts ‏(@RohanRicketts) is mesmerised: “Pirlo is a class act. His decision making on when you play one touch or take more is spot on. Weight of pass is also spot on. #EUR02012”

88mins: England legend Gary Lineker ‏(@GaryLineker) is trying to pick up some German: “Just asked @J_Klinsmann if they have a word in German for bogey team. He said they don’t. I think they need to find one!”

Full-time: AC Milan midfielder Kevin-Prince Boateng ‏(@KPBofficial) is impressed by Balotelli: “Italiaaaaaaaa!!! Balotelli showed the world what a player he can be!!”

Full-time: Newcastle’s Peter Lovenkrands ‏(@lovenkrands11) is backing Spain in the final: “Well done to Italy they played really well! Spain vs Italy is going to be a good one, think Spain will win!”

Germany 1 Italy 2: It was one of the best nights of my life, says Balotelli