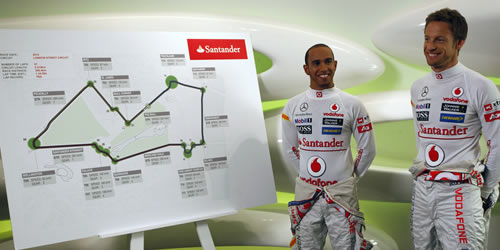 Lewis Hamilton believes that two races in Britain would be “completely justified” after rumours of a potential London Grand Prix gathered pace this week.

Formula 1 supremo Bernie Ecclestone was quoted as saying a race in London was a distinct possibility, and Hamilton and his McLaren team-mate Jenson Button were at a PR event on Thursday in which the duo raced round a track in the capital in simulators.

Hamilton feels the UK could easily accommodate two races, with the British Grand Prix set to take place at Silverstone on Sunday week.

“Some other countries have two races like Spain and Germany, and arguably the UK makes an enormous contribution to F1, so I reckon that would be completely justified,” Hamilton said.

“Silverstone is more than just my home race – it’s a giant of a circuit, a real racer’s track. The idea of a London race presents a completely different possibility and it would be great to reward our home fans with two races, wouldn’t it?

“A grand prix here would be the best thing in the world. They [the track designers] never approach drivers to have any input. But I would be very open to help in any way.”

Ecclestone had earlier this week voiced his belief that a race in London would represent a major coup for the capital.

“Think what it would do for tourism,” Ecclestone told the Times. “It would be fantastic, good for London, good for England — a lot better than the Olympics.”