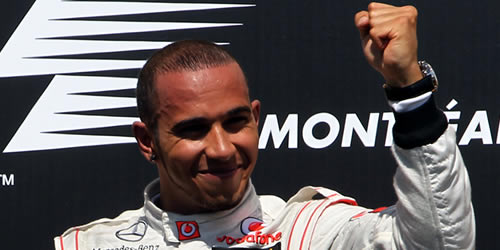 Lewis Hamilton believes Red Bull’s Sebastian Vettel and Ferrari’s Fernando Alonso have emerged as his main rivals in his bid for the world title this season.

Hamilton became the seventh different winner in as many races at the weekend when he produced a stunning drive to clinch victory at the Canadian Grand Prix.

The McLaren driver’s triumph in Montreal moved him to the top of the drivers’ standings, two points clear of Alonso, with defending champion Vettel a further point back in third.

And the 27-year-old is expecting the current top three to be the main men battling it out for the title as an unpredictable season continues to unfold.

“I think Fernando and Sebastian,” Hamilton told ESPNF1.com when asked who he thought would be his main rivals in the hunt for the world championship title.

“Sebastian being the current world champion and Red Bull are the current constructors’ champions. They’ve got an incredible car again this year and so they will be very tough to beat throughout the year.

“Fernando and Ferrari have picked up their pace massively. You can see through the last three races they’ve brought new upgrades to Barcelona, to Monaco and then a big upgrade package copying our exhaust system in Montreal, so they are pushing incredibly hard.

“The whole battle of the year is understanding the tyres and the development of the cars from the teams, and also the drivers staying on form.”