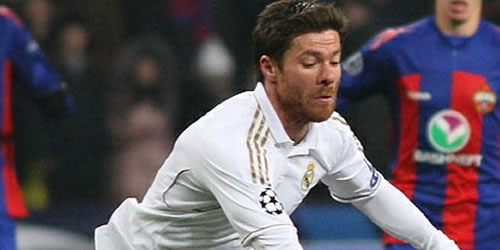 Xabi Alonso will play his 100th game for Spain on Saturday if he starts in the quarter-final clash with France.

Alonso, born in Tolosa in the Basque Country, will enter the ‘100 club’, joining Iker Casillas (134 games), Andoni Zubizarreta (126), Xavi Hernández (112) and Raúl González (102), if he is part of Del Bosque’s plans for the last-eight showdown.

The Real Madrid midfielder, who spent five seasons at Liverpool, made his 99th appearance for La Roja against Croatia on Monday and drew level on international caps with Carles Puyol, who missed out on Euro 2012 due to injury.

Alonso made his debut for his country nine years ago under manager Iñaki Saez against Ecuador, when Spain thrashed the South Americans 4-0.

Since then, the former Liverpool midfielder has been one of the team’s most important players and was instrumental in helping lift the European championship trophy in 2008 and the World Cup in 2010.

Spain’s 10 most capped players of all time