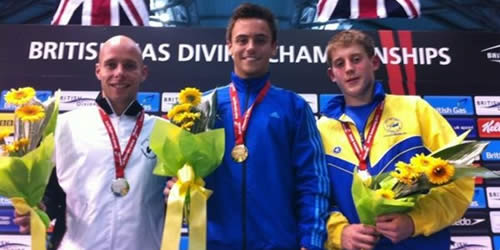 Tom Daley declared he is in the form of his career after claiming the national 10m platform diving title in Sheffield.

Daley could not better his personal best score from the recent European Championships in Eindhoven but he finished well ahead of synchro partner Peter Waterfield and third-placed James Denny.

“I’m loving my diving at the moment, it’s the best form of my career,” said Daley, who will now go for gold in two disciplines at the London 2012 Olympics.

“I’ve been trying to get more volume in my dives and get lots of numbers under my belt.

“To finally dive well at nationals for once was good; normally I don’t do so well in those. The only years I’ve dived well are the 2009 Nationals and this year.

“Last year was the first year I did all my new list of dives, so now I know I’m in good shape going into the Games.”

Rebecca Gallentree should have sealed her Games place with a new British record and personal best in the 3m springboard securing her third career title at the British Gas Diving Championships.

“I had a few doubts this morning, but I sorted my head out, had a good rest, came back with a clear head and performed,” said Gallantree, who qualified fifth from the preliminary.

“I don’t think I’d have been any less nervous if I’d done well.”