London 2012: Mo Farah one of 109 athletes selected for Europeans 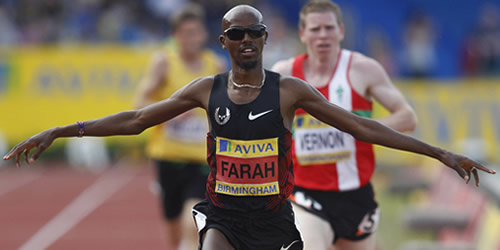 World champion Mo Farah heads up a provisional squad of well over 100 for next week’s European Championships – although it is set to decrease dramatically after this weekend’s Olympic trials.

Farah is among 109 athletes chosen for the first-ever European Championships to be held during an Olympic year, with Helsinki in Finland set to act as the host city.

However, the actual squad size will be far less than 109, with any track athletes that gain automatic qualification for this summer’s Olympics at the trials de-selected to focus on the Games.

To qualify for London 2012 track athletes must have recorded an Olympic A standard time and then, or in the process, finished in the top-two at the trials.

The likes of Christian Malcolm in the 200m, Andy Baddeley in the 1500m, Andrew Pozzi in the 110m hurdles and Shana Cox in the 400m – all chosen for the Europeans – will be expected to miss out.

The same does not apply for field athletes however with those selected permitted to compete should travelling to Helsinki aid their overall build up.