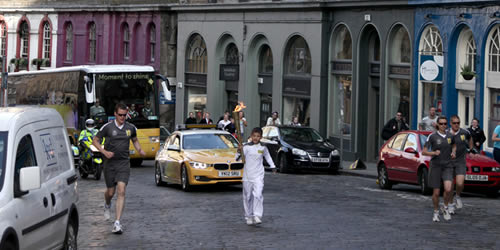 The Olympic torch left Scotland on Thursday after 715 people helped carry it 846.12 miles, with London 2012 chairman Lord Sebastian Coe hailing how it was welcomed.

The flame spent seven days touring Scotland with Scottish Parliament, Loch Ness, Scone Palace and the Callanish Stones among the highlights of the journey.

The torch was also carried along St Andrews West Stands and in a boat across Clickimin Loch and coincided with Bank of Scotland National School Sport Week.

Nearly half a million people turned out to watch the 715 Torchbearers and Lord Coe thanked everyone involved for their support.

“I want to thank the people of Scotland for giving the Torch Relay such an excellent and warm welcome,” he said.

“The Relay gave local communities throughout Scotland the chance to come out and celebrate the achievements of inspirational Torchbearers and share in the excitement of the build up to the Games.”

“The crowds that have come out to see the Torch in communities around Scotland, and cheer on our Torchbearers, have been truly spectacular,” she said.

“Over 400,000 Scots have taken in the Torch tour and that Olympics excitement will no doubt return when the Torch comes back to Dumfries next week and during the eight Olympics football matches at Hampden in July.”