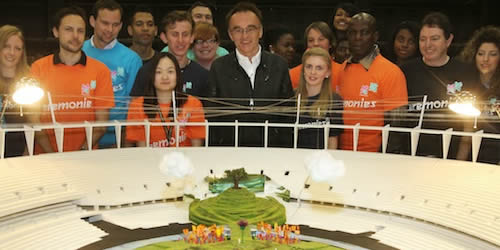 Oscar-winning director Danny Boyle is deep in preparations for the show, which will feature a cast and crew of over 10,000.

There have already been 157 cast rehearsals, while staff are working hard to produce 23,000 costumes, including sewing 24,570 buttons onto clothing that will be worn during the opening sequence.

Organisers expect more a billion people around the world to tune in, with the show opened with the ringing of the largest harmonically-tuned bell in the world, produced by the Whitechapel Bell Foundry, measuring two metres tall by three metres wide and weighing 23 tonnes.

The Olympic Stadium is currently being fitted with 15,000 square metres of staging, a flying system that can lift the equivalent of five elephants and a million watt PA system – double the amount of speakers than on the main stage at Glastonbury.

Nearly 13,000 props will be used – over 100 times more than a West End musical – and almost 100 different companies are providing services to producers.

“The ceremony is an attempt to capture a picture of ourselves as a nation, where we have come from and where we want to be,” he said.

“The best part of telling that story has been working with our 10,000 volunteers.

“I’ve been astounded by the selfless dedication of the volunteers, they are the purest embodiment of the Olympic spirit and represent the best of who we are as a nation.”

London 2012: Jessica Ennis is in the form of her life – Denise Lewis