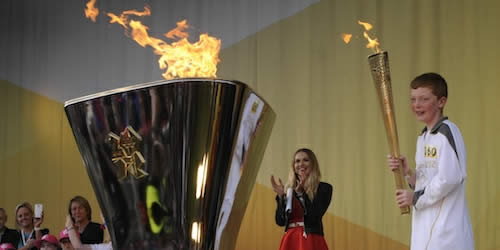 A man was arrested as the Olympic torch relay was briefly disrupted by a dissident republican protest in Northern Ireland.

Ironically, the flame was about to pass over the Peace Bridge, which links the divided communities of Londonderry.

But after a brief scuffle with police, the relay was rerouted and concluded with a celebration in the city centre, where security was tight.

Grandmother and community organiser Isobel Coote, 58, carried the torch across the bridge and passed on to Meabh Fisher, 13.

“We support anyone’s right to protest but that has been abused here in Derry,” said Mark Durban, a local Northern Ireland Assembly member for Irish nationalist party SDLP.

“People are just absolutely disgusted that there will be negative headlines for the city coming out of a great afternoon.”

World Heritage site the Giant’s Causeway and Carrick-a-Rede rope bridge were among the highlights of day 17 of the relay.