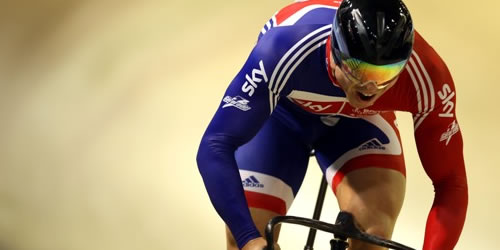 Sir Chris Hoy says he will back anyone who is selected to represent Britain Photo: British Cycling

Drugs cheat David Millar will have the full support of cycling legend Sir Chris Hoy if he is selected for London 2012.

The 35-year-old was included in Team GB’s provisional road racing squad after his eligibility for selection was confirmed by the British Olympic Association’s legal defeat at the Court for Arbitration for Sport last month.

“I’ll be 100 per cent behind whoever is part of this team because they’re eligible,” said Hoy, who is chasing a third consecutive Olympic gold medal.

“I’m comfortable with whoever is selected because they’re eligible for the team, and it’s never been about individuals or one-off athletes that I’ve had an issue with.

“It’s been more about the future and having a meaningful deterrent against people thinking about taking drugs.

“Someone could be sitting there thinking about Rio as a target and could be thinking that it’s a risk worth taking because they could test positive, but come back in and compete again. That was always my standpoint.

“There should be meaningful deterrents there, things that will genuinely put people off taking drugs. All athletes want that – they want a clear and clean field to race against. It’s a shame that that by-law has gone, but it has, so I’ll welcome whoever is standing next to me in the GB kit.”

Hoy believes it is a waste of a time to think about opponents who might have taken performance-enhancing drugs.

And though the 36-year-old is still not sure of what event he will ride at the Games, a situation he says is not ideal, he is taking the positives of being kept on his toes, particularly for the team ethic.

He said: “You don’t think about your competitors are taking drugs at all because it’s a distraction. “Obviously, statistically, people in the past have tested positive and therefore people we have raced against in the past have been on drugs, but it’s a waste of your energy thinking about it.

“I know I’ve beaten everybody clean before. Therefore, if you can do it clean, then you don’t have to worry about anybody else trying to cheat their way to the top.

“Whoever gets selected for the sprint will do a great job, whether it’s Jason or myself. There’s no point worrying about it, it’s out of your control. All you can do is train hard. In the past, even when a team is selected, things can change at the very last minute.

“So even if you’re selected, you’re not necessarily selected because you can get ill or injured, you could have a drop-off in form.

“The training we’re doing wouldn’t change, we’re still in the same plan we’ve had during the last few months. We’ll wait and see – it’s a nice situation to be in because I think whoever does the job will do a good one.