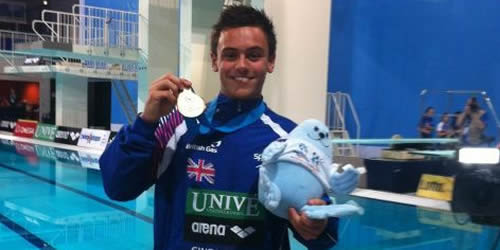 And the pair believe there is still plenty of room to improve after posting a total score of 475.77 to also secure their Olympic selection.

“To come out of the World Series as overall champions and then come here and set a new personal best is great,” said Daley.

“Everyone is very excited for the announcement of the Olympic team on Monday, so everyone’s come to the Championships in the best shape they can be.”

European champions Tonia Couch and Sarah Barrow won the women’s 10m synchro title – although they were the only pairing entered.

Together they’ve enjoyed a year to remember already, winning bronze at the FINA World Cup before continuing their success last month in Eindhoven.

And despite no opposition, they also bettered their previous personal best score, setting a 327.18 British record in the process.

“With the PB everything is going to plan and we’re working really hard,” said Couch. “I dropped one of my dives, so it wasn’t the best we can do – if I’d got that it could have been 330 or more.”

Defending champions Nick Robinson-Baker and Chris Mears won gold in the men’s 3m wynchro to increase their chances of being selected for Team GB this summer.

“This is exactly where we need to be at this point, with the Olympics coming up,” said Mears.

“We’ve put in a great performance, and done some really nice dives, and that’s really positive looking forward to the Games and the selection on Monday.”

Robinson-Baker added: “I feel in the best possible position I could be in physically and mentally. Since Beijing, we’ve come on a long way.

“We just need to get strong, get fit and mentally set to compete in the next 50 days.”

Ben & Rita, the best sailing double act since the Owl & the Pussycat