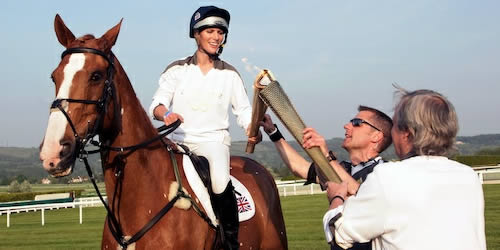 The Queen’s granddaughter, who won the world title in 2006, will follow in the footsteps of her mother, Princess Anne, who rode at the 1976 Montreal Games and father Mark Phillips, a team gold medallist four years earlier in Munich and a silver medallist in 1988.

Her selection was sealed by a solid third place finish on horse High Kingdom at the Branham International last weekend and she will join William Fox-Pitt, Mary King, Piggy French and Tina Cook in a strong British team.

Phillips, who is married for former England rugby captain Mike Tindall, missed out on selection for both the 2004 and 2008 Olympics because of injuries to her world title winning horse Toytown – who she rode during a leg of the Olympic torch relay last month,

While undoubtably one of Britain’s top riders, it was feared Phillips would not have a suitable horse for the Games but High Kingdom – which is owned by businessman Trevor Hemmings, whose horse Ballabriggs won the 2011 Grand National – has shown rapid improvements in recent months.

“It’s awesome to be given this opportunity. I am really excited and can’t wait to kick on and get him there. Hopefully, we will make it this time,” said Phillips, in a statement.

“High Kingdom is a pretty cool, very relaxed kind of guy. I was really happy with him at Bramham as he had obviously grown up and is improving all the time. He’s pretty pony-like, a nippy little jumper and easy to manoeuvre, so hopefully it will suit him well in Greenwich.

“High Kingdom is owned by Trevor Hemmings, who has been one of my earliest supporters. He has owned a lot of my horses and has been so supportive, I couldn’t do it without him.”