Jordi Alba is to join Barcelona on a four-year contract in a deal worth around €12m (£9.6m) despite interest from Old Trafford 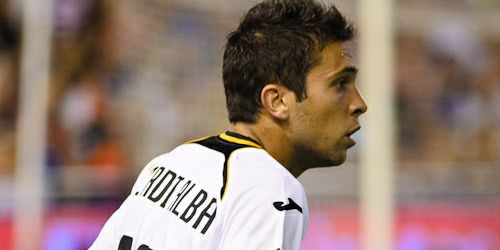 Jordi Alba was a reported target for Manchester United Photo: CarlosRM, via Wikimedia

Jordi Alba is on the verge of joining Barcelona from Valencia after the two clubs came to an agreement on the Spain left-back’s transfer fee.

Now all that remains is for the clubs to agree to the date on which the transfer will be made official.

Although the fee has yet to be confirmed, it is understood that Barcelona will sign Alba on a four-year deal worth €12m (£9.6m), rising to €15m (£12m) subject to bonuses.

Alba, who was a reported target for Manchester United this summer, was born in Barcelona and joined the club’s youth academy before leaving to join UE Cornellà when he was 15.

He made his debut in La Liga for Valencia in September 2009 against Real Valladolid and two years later made his first appearance for the national side, against Scotland in Alicante.

He has been Spain’s first choice left-back at Euro 2012, starting every game in the tournament so far.