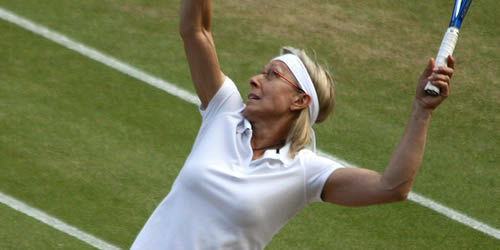 When a woman of the stature of Martina Navratilova speaks about tennis, she’s usually worth hearing.

When her comments are echoed in the same week by another multiple Grand Slam champion and former No1, Andre Agassi, it makes the message—in this case especially—even harder to take.

In short, both are of the view that Andy Murray may be destined to find his way barred from Grand Slam victory due simply to the era in which he finds himself.

Navratilova, who was talking to the Laureus Sport for Good Foundation, has been described by Billie Jean King as “the greatest singles, doubles and mixed doubles player who’s ever lived.

Agassi won eight singles Grand Slam titles from 15 finals as well as gold at the 1996 Olympics in Atlanta. He is one of four men to have won the career Grand Slam in the Open era and the first male player to win all four on three different surfaces.

Agassi, talking this week to BBC Sport, was entirely complimentary about Murray’s tennis but feared for the Scot’s chances of Slam success because of the competition he faces.

“The top three have definitely established themselves as a cut above, but I do believe he [Murray] has the ability to do it.”

Agassi was also encouraged by Murray’s step of taking on Ivan Lendl as a coach. The American, like Lendl, lost several finals before success came at Wimbledon—a factor that Murray highlighted when he announced his tie-up with the former Czech, for he too has lost his first three Grand Slam finals.

Agassi did not see that as a problem in itself: “I don’t know Ivan as a coach but I think it’s a sign that Andy is looking for something additional, a missing link, which means he’s still fighting and he still cares, so for that I credit him. If he cares hard enough, he will find a way.”

Navratilova’s message was, perhaps, rather more stark: “I see it as a top three. Murray is not in the mix, I mean he gets to the semi-finals.

“He’s been to a couple of finals, but Djokovic, Nadal and Federer are head and shoulders above everybody else. Those guys are just playing on another level.”

And she, too, put it down in part to bad timing.

“Does he have a Grand Slam in him? Does he have enough time for it? Absolutely. But he is coming up against very good guys.

“Of course you have had Nadal v Federer for five or six years and now it has become Djokovic v Nadal. So now you have three of the greatest men’s players that ever played the sport playing at the same time.

“I think Djokovic, if he keeps going like he has been, will be up there and certainly Nadal. And Federer is considered the greatest with Rod Laver. Federer [at the moment] may be the greatest of all time, but Nadal may be the better player between the two of them! So it is just an astonishing time in men’s tennis.”

Murray played his second of two exhibition matches at The Boodles event this week against one of the three titans who have so far blocked his path to the ultimate prize. He lost to Djokovic, in a rain-interrupted match, just as he had against the Serb’s compatriot, Janko Tipsarevic, yesterday, though the results were not great cause for concern.

Murray admitted that his early loss to Nicolas Mahut in defence of his title at Queen’s Club last week was a disappointment, but seemed relatively unfazed:

“I think my preparations have gone very well. Queen’s was obviously disappointing, but here [at Stoke Park] the results weren’t important at all…I had a couple of good practice matches over at Wimbledon and had a couple of matches here as well. It’s been good.”

But even the best prepared player, even a player with Murray’s undoubted talent and work ethic, cannot control the competition he faces. The results since Murray turned pro as an 18-year-old shout his problem loud and clear: Federer, Nadal and Djokovic have won 30 or the last 32 Grand Slams, and there are few who would bet against one of them winning the next one in just over two weeks’ time at SW19 as well. As Agassi concluded:

“I think we’ll look back and see this as a real golden era of tennis. The top three in the world winning so many of the Grand Slams is remarkable.”