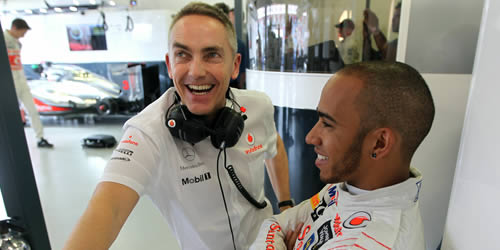 A driver who wins as few as just two races this season could still take the world title if they are consistent, McLaren team principal Martin Whitmarsh has claimed.

Whitmarsh and his McLaren team celebrated Lewis Hamilton’s first race win of the season in Canada earlier this month as the Briton moved to the top of the drivers’ standings, two points clear of Ferrari’s Fernando Alonso.

And Whitmarsh claims Hamilton may only need one more race win to clinch the title, as long as he is able to consistently finish amongst the points for the rest of the season.

“It’s certainly feasible that this year’s title could be won by a driver who scores only two or three grand prix wins, but who reinforces those victories with the most consistently solid approach,” said Whitmarsh.

“So, whereas in previous years, there was an emphasis on the ‘big’ results, this year it seems that minor points placings could provide a decisive edge in the title battle.”

Hamilton became the seventh different winner in as many races this season with his victory in Montreal – and Whitmarsh admits the margins between success and failure are finer than ever as an unpredictable season continues to unfold.

“Given that the delta between ourselves, Ferrari, Mercedes and Red Bull is so narrow, we’ll once again be pushing hard on both our operational and technical fronts to ensure we stay at the front,” he continued.

“As always, we aim to bring at least an additional one-tenth [of a second] laptime benefit to each race, and we’re pushing hard to ensure we can over-deliver on that on as regular a basis as possible.

“It may sound like a negligible increment, but it could prove to be the difference between winning and losing the world championship.”