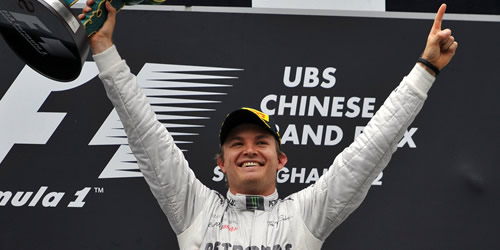 Rosberg sealed his first-ever Grand Prix victory in China earlier in the season and is currently fifth in the drivers’ standings, 21 points behind leader Lewis Hamilton.

And Mercedes team principal Brawn is upbeat over the 26-year-old German’s chances of clinching the world title in what is turning out to be an unpredictable season.

“Nico’s driving very well, the car’s extremely competitive and Nico’s one win away from leading the world championship,” said Brawn ahead of Sunday’s European Grand Prix.

“We just have to fight with everything we have to achieve the best result we can and see what evolves. But there’s no reason why not.”

Rosberg himself believes the Valencia Street Circuit will “suit” his Mercedes this weekend.

“Valencia is a pretty cool city and it’s always nice to visit there,” he said. “The track is another street circuit but it’s quite a unique one as it is quicker and has a more open feel than somewhere like Monaco or Singapore.

“The layout is also kind of like Montreal so it should be a circuit which suits our car. I was at the factory this week and I know how hard everyone is working to improve the car, so we will hope for a strong weekend in Valencia to repay all of their efforts.”