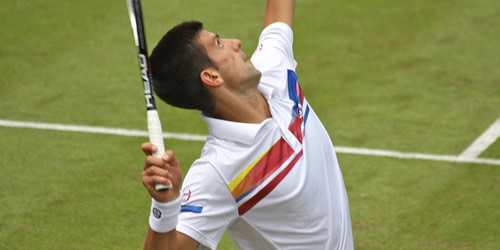 Novak Djokovic, the defending champion at Wimbledon, is playing at The Boodles this week M Bevis

In England, it’s ‘the season’: the warm, green, laid-back month of June that heralds the arrival of the all-too-short grass-court window between the French Open and Wimbledon.

It starts with tennis—at Queen’s Club—and ends with tennis—at Wimbledon—and takes in the most beautiful countryside in southern England along the way: Ascot, Marlow, Henley.

And make no mistake. This year—as if decreed from above—everything is just a bit more green, a bit more verdant, a bit more lush and welcoming for a particularly special summer that will climax, rather later than usual, on the lawns of the All England Club at the Olympics.

Squeezed into this high-profile calendar is a handful of small gems that help to satisfy the enthusiasts’ craving for old-fashioned tennis as well as the players’ demand for grass.

There is the traditional seaside stopover at Eastbourne and the round-robin exclusivity of Hurlingham, but the one that has drawn the most prestigious participants is buried within the near-perfect setting of Stoke Park.

The Boodles is hosted within Stoke’s stunning 350-acre estate in the depths of the Buckinghamshire countryside, and it’s a setting that has attracted the cream of the men’s tour.

No fewer than nine of the top 20 are here, including the only two of the ‘big four’ playing this week.

It was on these lawns last year that Novak Djokovic fine-tuned his grass game on his way to winning his first Wimbledon title and taking the No1 ranking that he has held ever since. His reason for returning is simple:

“I enjoy playing at Stoke Park and look forward to preparing the defence of my Wimbledon title at The Boodles.”

The other big name, who will draw probably even more interest from the home crowd, is No4 Andy Murray—also returning here for consecutive years. Three times Murray has been a Wimbledon semi-finalist, but in 2012 he has the added incentive of going for both a first Grand Slam and, just a month later, an Olympic medal.

Murray was not perturbed by falling early last week at Queen’s Club, despite being the defending champion. And The Boodles, as a result, has attracted Murray for two matches—this Wednesday and Thursday.

So who else will tickle the tastebuds here this week?

Making his second appearance at The Boodles is 2009 US Open champion, Juan Martin Del Potro. After missing most of 2010 with a serious wrist injury, the Argentine is back inside the top-10 after putting together a 37-9 win-loss record this year that included two titles.

Despite carrying a knee injury through the French Open, he reached the quarters and, with a week off for some rest and recuperation, will make his only grass preparation in a friendly match at Stoke Park on Thursday.

He summed up nicely what is unique about this kind of preparation: “It’s nice to play somewhere where the crowd is very close and the tennis is fun but serious at the same time. All the guys want to get time playing on grass ahead of Wimbledon, especially when you can play against really good players in a good atmosphere.”

There are contrasting styles from the other two top-10 players in the field.

Janko Tipsarevic will be 28 on Friday, and is one of a band of players who has slowly but surely climbed the rankings well into his third decade. Only a year ago did he break the top 30 for the first time, and a year before that he was at 50. He played the World Tour Finals for the first time in his career at the end of 2011 and clearly has no intention of stopping there: He reached No8 this April.

No10 John Isner has also been a slow maturer—deciding to finish his college studies before devoting himself entirely to tennis.

He does not count clay among his favourite surfaces, despite beating Roger Federer on the stuff, at altitude, in the Davis Cup this year. But he reached his first Masters final on Indian Wells’ hard courts this year, reached the semis indoors at the Paris Masters last year and had a scorching run on the North American hard courts last year.

When it comes to grass, he will remembered for the longest-ever Wimbledon match against Nicolas Mahut in 2010, but he may be ready to make his name for something more significant there this year.

He steps onto grass tomorrow, Wednesday, for the first time this year, against the winner at Queen’s a couple of days back, Marin Cilic.