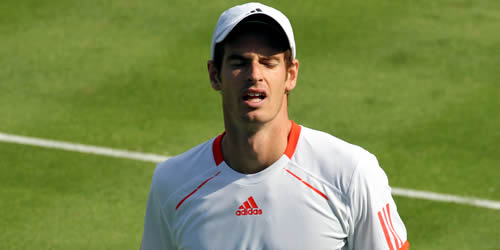 As if in celebration, the sun came out on the day that the top eight seeds started their grass campaign.

Against all the odds and the rain and the cold, the whole first round of the Aegon Championships’ 64-man draw was complete with not a seed lost on the way. Time to sit back and soak up the special qualities of grass in all its glory.

For this is a precious chance for players to repackage their clay court skills for the fresh demands of grass, and nowhere prepares them for the unique field of dreams down the road at Wimbledon than the most prestigious venue with the most pristine grass of all: the Queen’s Club.

Queen’s, shoehorned into one of the most desirable parts of residential London in West Kensington, has preserved its compact, intimate quality. It also lays the ground for the old-fashioned atmosphere of Wimbledon, where crowds are more restrained and there is, thus far, none of the musical razzmatazz that characterise the hot and lively American, Australian and southern European seasons.

But the key to Queen’s is its most precious asset, possibly the fastest and slickest grass of all, with courts that keep the bounce down and the speed up. It is a place where slice and pace and serve-and-volley tennis thrives better than anywhere else.

Andy Roddick, a four-time champion here, expressed it thus: “When I get on a grass court it just feels natural to me. I don’t feel like I’m fighting myself like I do on clay for instance so it’s always a welcome transition for me.”

But that was not the only thing to attract Roddick for the 11th time. He simply loves the place: “I enjoy the surface, I enjoy the club and I enjoy the esteem in which they hold their champions.”

Andy Murray, too, knows the pleasure of winning the biggest piece of silverware in tennis more than once. Champion in 2009 and last year, this is his seventh visit since playing his first ever ATP tour match in 2005:

“I’ve always enjoyed playing here. I like the surface, the courts here are pretty much perfect grass and I have great memories from here. I won my very first ATP match here when I was 18 and since then I’ve just really enjoyed coming back.”

The two former champions had the honour of spearheading the elite eight on Centre Court. Roddick had, on paper, little reason to worry even though he came to Queen’s at his lowest world ranking, 32, since his debut in 2001. And Frenchman Edouard Roger-Vasselin, ranked 67, lost to Roddick in their only previous meeting last year. Since then, though, much of his season had been marred by injury and he had built only at 7-10 win-loss record.

His most recent win was in Miami in March and he had taken not a single match on clay. And, in a nice piece of symmetry for the opening matches on this sunny Queen’s afternoon, his last loss was to Nicolas Mahut—the man lined up to play Murray.

It proved to be a tough and, ultimately, disappointing visit for Roddick. His opponent did not offer the Gilles Simon style of French tennis but the Michael Llodra and Mahut variety of chip-and-charge, touch volley and sliced backhand. He was near silent as he plied his trade and broke in the seventh game of the first set, serving it out 6-4.

Roddick had the edge in the second set, serving to a very high level—nine aces scattered through his 87 percent of first serves. He twice staved off break points and made the vital breakthrough in the 10th game, breaking Roger-Vasselin to level, 6-4.

When Roddick started the third set with a couple of break chances and twice held to love, it looked as though he would huff and puff—the only noise amongst the click and clack of racket on ball—to the next round. But the Frenchman did not depart from his net-bound tactics despite poorer serving and earned three break points at 6-5 courtesy of two backhand errors from Roddick. At the second attempt, the Roger-Vasselin stole an unlikely victory.

Roddick’s verdict was low key: “It wasn’t that bad. I mean, I served 80 per cent and had 22 aces. It was better than what I have been doing. I thought I had a look there in the third set – didn’t work out that way.”

He, like fellow four-time former champion Lleyton Hewitt, will be around their much-loved Queen’s a while longer to play doubles together. The same will not be true of the other Andy.

Murray, too, had beaten his first opponent in both their previous matches but Mahut—in another neat twist of the draw—had reached the final here himself, losing to Roddick in 2007.

The 30-year-old Frenchman, rather like his compatriot Roger-Vasselin, has been enjoying something of an Indian summer, rising 24 places in the rankings after his best-ever showing on his worst surface at Roland Garros.

He has put his calmer, more consistent form down to becoming a father this year, but the reality of his constantly-good performance at Queen’s—he had also beaten Rafael Nadal here—was revealed in his first news conference.

And that is just what he did: played according to his natural inclination with skimming serve and volleys, sliced angles, chip-and-charges and confident and accurate overheads as the occasion demanded. 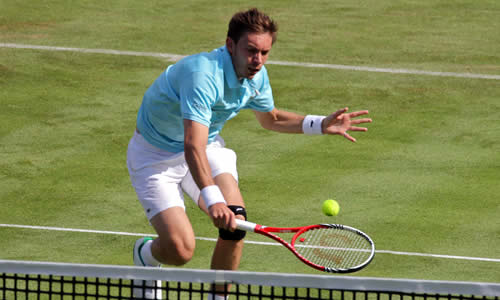 Murray afterwards admitted that he took some time to get adjust his movement in the first set and Mahut took swift advantage with a break in the sixth game and he served out the set, 6-3.

Murray’s serve picked up in the second, and he also tried to mix things up with drops and lobs, alternating slice with top-spin. The pressure told, and Mahut served two double faults in the second game, while a 135mph-ace from Murray assured a 3-0 lead. But Mahut broke back in the fifth to ensure this went to a tie-break and Murray’s superior serving took him level, one set apiece.

Mahut, five years older and with a heavily supported knee, has lost matches from this position before. When he was broken in the first game, it looked like a similar conclusion.

But perhaps it was fatherhood after all. His elegant skills came to the fore again, he broke back and stayed with the No1 seed all the way to a second tie-break. And this time, it was Murray who faltered. Three times he found the net with his forehand while Mahut picked off volley winners. The Frenchman ran out a 7-1 winner—and never perhaps has his smile been bigger.

He was remarkably gracious in victory, too: “For him was his first match. Even if he had three or four practice days on the grass, it’s not easy to start.

“Even if he’s world No4, it’s not easy to come on centre court, everyone expecting him to win. You know, it’s not easy, even for him.”

So a glorious day of packed crowds, sunshine, Pimms and emerald green courts ended with two Andys, two former champions, defeated by the most old-fashioned of tennis wielded by, maybe unexpectedly, Frenchmen.

Perhaps now, Mahut will be remembered in London for something more than the longest match ever played—his painful defeat, 68-70, to John Isner at Wimbledon.

Another compatriot, Jo-Wilfried Tsonga, advanced past the last British man in the draw, Jamie Baker, but Simon—in keeping, perhaps, with his baseline style of tennis—was another seed to fall.

Other seeds who did not survive a second day of play included Marcos Baghdatis, Gilles Muller, Alex Bogomolov and Ivo Karlovic.