Sebastian Vettel and Fernando Alonso would have no problems driving together as team-mates, claims Ferrari team principal 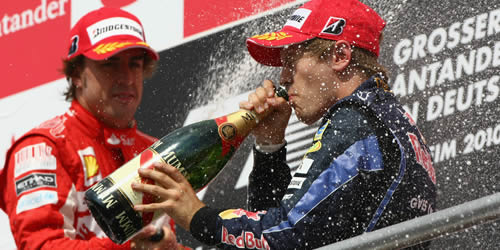 Sebastian Vettel and Fernando Alonso would have no problems driving together as team-mates, according to Ferrari team principal Stefano Domenicali.

Red Bull driver Vettel has been linked with a switch to Ferrari, with speculation heightening in recent months after reports claimed the German has signed a pre-contract with the Monza-based outfit for 2014.

And Domenicali, who was interviewed with F1 supremo Bernie Ecclestone by German magazine Sport Bild, is convinced that the defending world champion would have no problem driving alongside Alonso.

“I think they are both intelligent guys and they could easily coexist together,” said Domanicali in the interview, which was published on Ferrari’s website.

Ecclestone shares Domanicali’s view and claims that being in the same team would present an attractive “challenge” for both drivers.

“That wouldn’t be a problem,” Ecclestone said. Both are drivers who are always looking for a new challenge, and to be in the same team would be a new and big challenge.

“They would both think they can beat the other one, as they are sure of themselves and Stefano would do what was required to so that they were treated equally.

“It would be a case of doing what I did at Brabham in 1979 with Niki Lauda and Nelson Piquet. I told them, ‘guys it’s simple: whichever one of you is quickest is the team number one’.”