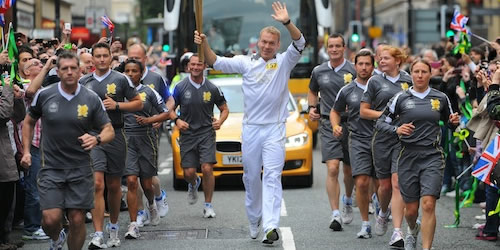 Sir Chris Hoy brought Manchester city centre to a standstill as he carried the Olympic torch through his adopted city.

The four-time Olympic champion – who could go for three more golds at London 2012 – was the star attraction on day 36 of the 7,000 mile torch relay.

Hoy, who was nominated to carry the flame by London 2012 sponsor and relay national presenting partner Lloyds TSB, admitted the huge crowds had left him stunned.

He also joined the spectators, ten deep in places, to watch Geoff Cooke, the cycling coach who guided his early career and who he had nominated to carry the flame, take his turn in the spotlight.

“Manchester is like a second home to me and the whole experience has been incredible,” said Hoy.

“It’s just fantastic to be involved and humbling to read about all the people from local communities who have been nominated for the inspirational things they do that don’t get in the headlines.

“Andy is 95 years of age and to see how many people from the community came out to support him, it was phenomenal. It just shows the Olympic torch, it’s not about gold medals, it’s about communities coming together.

“It was also an honour to be able to nominate someone like Geoff, who has done so much for me and his sport. To see how much it meant to him was amazing.”

Cooke’s daughter flew in from the United States to watch his run and he admitted the whole experience had left him feeling humbled.

“It is definitely one of the best days of my life, it has been a fairly long life already and there have been some good moments,” he said.

The Olympic torch is just over halfway through its 70-day journey and on Sunday will visit Manchester United’s Old Trafford home, where Red Devils legend Sir Bobby Charlton will carry the flame.

It is estimated more than four million people have so far seen the relay with over 3,600 torchbearers involved so far.

“The London 2012 team continues to be thrilled and delighted by the fantastic support received in every community, as people come out to line the streets and help build the excitement as the start of the 2012 Games draws nearer,” said London 2012 chairman Seb Coe.

As the only National Presenting Partner of the London 2012 Olympic Torch Relay, Lloyds TSB is bringing the excitement of the Games and Olympic Flame closer to you. Find out what we’re doing in your community and who is carrying the Flame at lloydstsb.com/olympictorchrelay