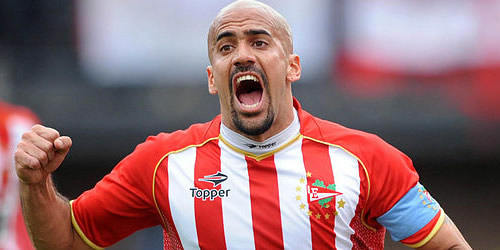 Although his last ever match is away in Santa Fe, last weekend saw the final home game of Juan Sebastian Verón’s career and he was given quite a send-off by his beloved Estudiantes. While the match did end 1-0 to Estudiantes, the goal coming from a Verón corner, the game was not what anyone was focusing on – to the extent that when the 37-year-old was substituted two minutes from the end, the television cameras ignored the rest of the match and went straight to interviewing Verón on the bench. Fireworks, countless commemorative shields, plaques and shirts were to follow as an adoring public said goodbye to the man who had ushered in their most successful era since the high-flying days when another Verón, his father, won three consecutive Copa Libertadores titles.

Argentina’s Boca Juniors took a huge step towards securing a place in their 10th Copa Libertadores final with a convincing 2-0 win over a much-lauded Universidad de Chile side. On an atmospheric night at a mist-shrouded Bombonera, the Buenos Aires club struck in each half through Santiago Silva and then Juan Sanchez Mino, while an impressive defensive performance ensured La U’s dangerous attack was largely kept at bay in their quest for a vital away goal. The result is a huge boost to Boca as they go in search of a record equaling seventh title. In the other all-Brazilian semi-final, Corinthians grabbed a crucial away goal to leave Santos’ pursuit of a second successive title in real doubt. Winger Emerson scored the only goal of what was a lively encounter in the first half, bending a shot over the head of Rafael, although he then went on to be sent off for two bookable offences. A floodlight failure five minutes before the end of the game saw the match briefly suspended but play did eventually resume, and Corinthians held on for a well-deserved win which moves them one step closer to the final.

Tigre are potentially one game away from securing their first ever Primera title thanks to a 1-0 win over Velez Sársfield. Carlos Luna’s 11th goal of the campaign took his side to top of the table with one game to play. If the possibility of a maiden title wasn’t pressure enough, Tigre also bizarrely find themselves needing to win to avoid relegation, as a result of Argentina’s unusual relegation system calculated on three-year points averages. Their main rivals for the title are Arsenal de Sarandi who jointly lead the table thanks to this weekend’s thrilling 3-0 win over Boca Juniors, whose own title challenge suffered a major blow. All Boys had begun the weekend in contention for the title as well but a 1-0 defeat by Argentinos Juniors ended their hopes. However the game was most notable for the fact that an incredible six players were sent off – All Boys ended the game with seven men. The match dubbed “the card show” by local sports newspaper Ole, saw its first red card in the 16th minute. Early in the second half both sides had a player sent off, before goalscorer Juan Jose Morales – first booked after scoring for taking off his shirt and displaying a father’s day message – received a second yellow minutes later to become the fourth man dismissed. The visitors then had two more players sent off in the final ten minutes of what was an extraordinary game.

A bad start to their qualification campaign for the 2014 World Cup in Brazil has resulted in Francisco Arce’s sacking by Paraguay. Following their excellent 2010 World Cup where they reached the quarter-finals, expectations were high – but after picking up just four points from their first five games, they currently sit second from bottom in the nine-team group. Arce’s fate was sealed after their 3-1 loss to Bolivia in La Paz, despite the squad spending three weeks preparing for the high altitude conditions. Arce becomes the second coach to be sacked in qualification, following Colombia’s Leonel Alvarez last November.

The goal of the week for this edition is Emerson’s aforementioned curling strike in Corinthians’ Copa Libertadores semi-final first leg against Santos, which perfectly finished off an excellent attacking move and put his club within touching distance of the final.