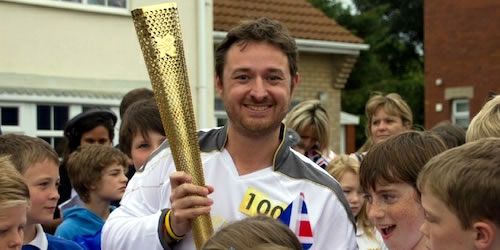 As Olympic moments go it wasn’t really worth the tiniest type footnote in the yet-to-be-written tales of the storied Games to come.

It was the running equivalent of the slow bicycle race, the ‘athlete’ determined to cover his 300 metres in the slowest time possible.

A purposeful stride was replaced by a pedestrian shuffle but the whole thing was still over in less than three minutes – although it certainly felt faster.

He wore a pair of brand new trainers but, in truth, he’d have posted the same lacklustre split if he’d been clad in Jayne Torvill’s skates, wearing Gail Emms’s mini-skirt and carrying Zoe Smith’s dumbbells.

They say it takes 10,000 hours of training to make an Olympic champion but preparation to carry the Olympic torch is somewhat easier – a few laps of the garden with a cricket stump is all that is really required.

No need to load on the carbs either, a full English was the fuel of champions on this occasion and certainly no need to taper, although taking it easy the night before with a couple of shandies had been recommended.

The biggest concern was left or right hand and whether to swap – he’d studied plenty of video of those that had gone before and elected to play it safe – right hand for torch and left hand to wave.

It’s worth noting, double-handed torch carrying is right up there with attempting to light a large Cuban cigar with the sacred flame in the list of Olympic no-nos.

But remember Helen Sharman. Here was a women so talented that she became the first British astronaut. She might have reached out and touched the stars but the simple job of carrying the torch during the opening ceremony of the 1991 World Student Games in Sheffield proved beyond her when she tripped and dropped it.

If a women with more letters after her name than a Thai boxer has in her name can struggle, what hope of someone who failed their cycling proficiency test and took seven attempts to get their driving licence?

He received the flame from Keith Tyler, 65, who has run 33 marathons and scaled Kilimanjaro – twice.

But the athlete still decided that slow and steady would win this race. He wore number 100 and ran it like a 100-year old.

Diana Gould, who will receive her telegram from the Queen just a few days before she becomes the oldest London 2012 torchbearer, will almost certainly go quicker.

For a few brief moments he reveled in his new-found stardom. He high-fived strangers, kissed babies, held court with the press and got really rather excited that everyone wanted his picture.

However, he soon realised that, unfortunately, the star wasn’t the chap holding it but the torch and flame, which day-by-day, mile-by-mile, as it inches ever closer to next month’s Olympic opening ceremony, is bringing this country together in a way few had imagined or predicted.

Even a disciplined chorus of cynics would surely be silenced by events in Wrawby – where Brits did what they do best and celebrated by selling really rather nice cakes – and countless other villages the length and breadth of this land.

Danny Boyle’s opening ceremony theme is Isles of Wonder – and this 70-day build-up couldn’t be a better indication of that bold and Shakespearean vision.

Although, on a selfish note, not that it really all matters.

Some find their sporting nirvana at Wembley or Lord’s or at an Olympic Stadium, in a far-flung land or, hopefully, closer to home.

However, this athlete will never match the sporting high he achieved on a stretch of the A18 between Kettleby Lane and Millholme Cottage.

As the only National Presenting Partner of the London 2012 Olympic Torch Relay, Lloyds TSB is bringing the excitement of the Games and Olympic Flame closer to you. Find out what we’re doing in your community and who is carrying the Flame at lloydstsb.com/olympictorchrelay

Ben Youngs is back to his best, says Leicester Tigers’ Tom Croft