Spain coach unapologetic after his side's edgy win. "We can't play like Madrid or Barça do against Zaragoza or Mallorca." 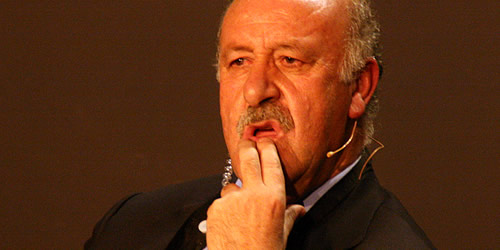 Vicente del Bosque's side edged to a 1-0 win over Croatia on Monday Photo: The Sport Review

Vicente del Bosque gave a long-awaited news conference on Tuesday after he was subject to a lot of criticism for Spain’s below-par performance in their 1-0 win against Croatia on Monday.

“Last night I watched the game again. Everyone has said we suffered a lot, but I realised that we didn’t play badly,” said the Spain boss, whose side topped Group C.

“Yes, Croatia posed a threat at times but I think we played well. It was a brutal match. All this talk that we were going to fix the result made the game much more difficult. We’ve gone from being paupers to millionaires so quickly that people don’t value what we have.

“But I think we’re a reliable team. We’ve made it to the quarter-finals but we’re not about to congratulate ourselves. However I think we had a stupendous group stage and we’ll keep going in the same direction. The future is in our hands and I hope we reach the final.”

“Football is a permanent debate. We have 23 players, each one of them can be picked, and this causes a debate. But the most important thing is that we have a stable line up and good team spirit, and that we don’t doubt ourselves. I’m not saying we’re outlandishly optimistic, but we’re aware of our ability. We’re serious candidates to win the tournament.”

Like Andres Iniesta, Del Bosque also spoke about people in Spain who believe the team should win every game 3-0.

“I accept that not everyone agrees with my decisions, and that there are lots of different opinions about the team. But you have to look at the results. It’s not correct to say that Croatia dominated the game. Only [Ivan] Rakitic and [Darijo] Srna troubled our defence.”

Del Bosque added that’s Spain’s style of play is not up for negotiation.

“We’re still playing in our own style, and we’re doing a good job of it. We can’t lose faith in the way we play. That would be the worst thing we could do.”