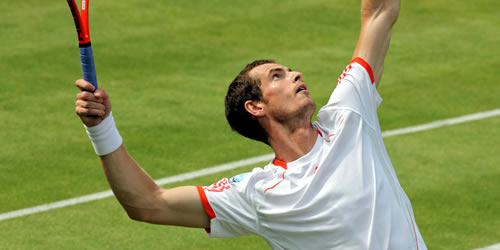 Andy Murray insists it would be “stupid” to look further ahead than his first-round test against Nikolay Davydenko at Wimbledon.

The Scot takes on the Russian former world No1 on Tuesday after he was once again placed in Rafael Nadal’s side of the draw at SW19.

Big servers Ivo Karlovic and Kevin Anderson potentially lie in wait for Murray, as well as possible match-ups with the likes of Richard Gasquet and David Ferrer.

But the British No1 says he is only worried about his first match. “It would be stupid for me to look past Davydenko. Although I’m sure many people will, I won’t be making that mistake,” he said.

“It’s always a tough match when you play against big servers. I’ve had a good record against them in the past.

“It can be quite mentally challenging playing against them because you can’t really lose focus on your own serve, even if it’s just for a few points.

“It can be tough to break them. Big servers usually play better when they’re ahead, as well.”

Murray insists the added burden of being a British player at Wimbledon does not get to him and says that having the crowd behind him can make all the difference.

“I think in all sports playing at home is viewed as being a huge advantage, whereas for some reason when it comes to Wimbledon everyone thinks it’s a bad thing. There’s more pressure on you and it doesn’t help,” he said.

“But I haven’t found it that way. When I’ve played here, I’ve enjoyed the challenge, I’ve enjoyed playing in front of a passionate crowd, and it’s helped me.”