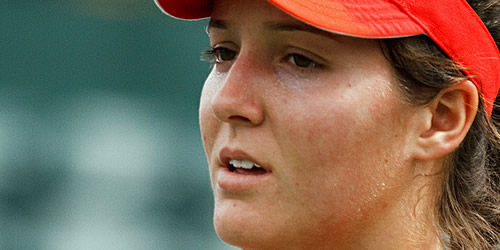 Laura Robson, one of the youngest players in the tournament at just 18, had already celebrated one new landmark this week with her debut inside the top 100.

It had been coming for some time, a breakthrough at the senior level, for she was a Wimbledon junior champion four years ago and is playing in the senior draw as a wild card for the fourth straight year.

But the last three years have hardly been kind to her—the fate of the unseeded in such a strong tournament. But even allowing for bad luck, Daniela Hantuchova in 2009, when Robson was a 15 year old, the then No3 seed Jelena Jankovic in 2010, and last year the current No1 and former Wimbledon champion Maria Sharapova is tough.

Even so, Robson has done well here: Her big-serving lefty game suits the grass and she has been the apple of the home crowd’s eye ever since she appeared on their radar in 2008.

She took a set from Hantuchova, pushed Jankovic to a tie-break second set and last year, she scored her first win by beating Angelique Kerber from a set down. The German has since gone on to race up the rankings, breaking into the top 10 after a semi-final finish at the US Open and a quarter-final finish at the French Open.

But Robson really showed her potential in her second round against Sharapova, looking ready to take the opening set but finally acquiescing in a tie-break before losing the second set, 6-3. Sharapova, of course, would go on to become runner-up and has hardly looked back: a runner-up in Australia too, and last month the French Champion

But once again, Robson must have cursed the draw for, once more, she faced a Grand Slam Champion in the veteran Francesca Schiavone.

The wily, wiry Italian is one of the most inspiring woman on the tour, winning her first Slam in 2010 in Paris, aged 29, and going on to reach the final the following year. Now aged 31, she has skidded down the rankings to No26 from inside the top-10, though, with only the title in Strasbourg alleviating a 17-17 win-loss record this year. What’s more, her strength is the clay, and she had got past the third round at Wimbledon only once in a quarter-final finish in 2009.

So on paper, there was a chance that this could be Robson’s moment against a woman 13 years her senior. Sure enough, she came out, to a packed Court 3, with all guns blazing, and hopes blossomed still further. She broke the Italian in the third game and then again in the fifth to take the first set in 25 minutes, 6-2.

Then there was a long delay as Schiavone called the trainer. With Court 3 away from the hub of the tournament, it took time for her arrival, time for an assessment of what looked like a back problem and then even longer as both player and trainer disappeared to a more discrete location for treatment.

Almost a quarter of an hour lapsed but it seemed to affect Robson not at all. One double fault was the only blemish on a clean opening service game, while Schiavone seemed to have trouble with her service action.

But the experience—and sheer willpower—of the Italian kept her in touch, despite the odd sign of frustration. After five games, the trainer reappeared—though apparently as a precaution—and there was no further delay.

Nevertheless, this became a turning point in her fortunes.

Robson hit a series of big shots to the Schiavone forehand to draw errors and 40-0 advantage, but then it was Robson who made the errors and the Italian woman held.

Now with teeth gritted and fist clenched, Schiavone went on the attack, chased into the net, and earned two break points. She converted the second for a 4-3 lead, defended a break point in the next game with some athletic drop-shot-volley combinations and took the set, 6-4.

The momentum was now firmly with the older woman and she broke Robson’s opening serve with a stunning forehand winner round the net post. The Briton took her to deuce in the next game but now the Italian’s sliced, single-handed backhand came into its own, with some of her cross-courts shots barely skimming the net to fade from Robson’s reach. Another break in the fifth took the gap to 4-1 and a love hold from Schiavone took it to 5-1.

Robson’s serve had begun to blow hot and cold—it was three double faults that did the damage in the fifth game. Nevertheless, she held off several deuces and two match points in the seventh and then, against the odds, made a break back as Schiavone produced a double fault of her own. Another hold by Robson and she was within touching distance of a major comeback, but it was not to be.

The experience of the veteran, serving for the match a second time, showed the determination that has made her Grand Slam champion. She advanced to the second round, in the end, by the skin of her teeth, 6-4.

Robson would lay no blame on the injury time-out, the grunts of her opponent nor on the time Schiavone took between points.

“I”m really disappointed actually,” she said afterwards. “I thought I was in control of it, and then just made a few mistakes and let her get back into the match. She’s a Grand Slam champion. She took advantage of that completely.”

Robson also took some positives from the loss, in particular that she feels closer to the level of players of Schiavone’s stature: “I stuck with her, even in the third set when I went 5-1 down.

“I’ve still got so many things to work on. I missed a lot of returns, and that’s definitely one of the key areas I’m going to be working on in the next few days.”

As far as the singles goes, she will also hope—as will her many supporters at her home Slam—that the draw next time is just a little kinder.