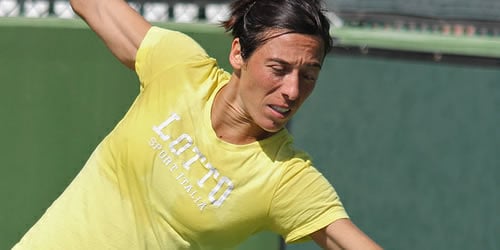 Francesca Schiavone could not hide her delight after beating Klara Zakopalova 6-0 6-4 to set up a fourth-round Wimbledon clash against defending champion Petra Kvitova.

The 32-year-old, who has never got past the quarter-finals at Wimbledon, completed an emphatic victory over the Czech Republic’s Zakopalova in one hour and eight minutes in the third round.

The 24th seed capitalised on her opponent’s 20 unforced errors on Court No12, and the Italian believes her form is continuing to improve after a difficult start in the opening round against Laura Robson, when she needed three sets to beat the Brit.

“I think it was a fantastic performance for me, particularly the first set and then at the end of the second, so I’m happy to be here now and to keep going,” said Schiavone.

Schiavone won her only Grand Slam to date at the French Open in 2010, beating Australia’s Sam Stosur in straight sets. The Italian lost to Li Na in the 2011 final at Roland Garros a year later.

The world No26 is relishing the challenge of facing defending champion Kvitova in the fourth round and admits she will need to be in top form to beat the fourth seed.

“She’s the champion, so everybody wants to beat her,” Schiavone added.

“I think it’ll be a really, really tough match. She has the character to play on grass, so I think I’ll have to play really a great match to beat her.”