Wimbledon 2012: Heather Watson is the first Brit to reach third round 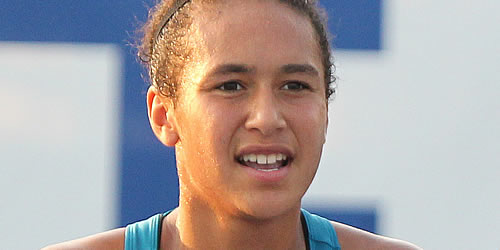 The last British woman to reach the third round at Wimbledon was a full decade ago. That woman, Elena Baltacha, is still playing, and yesterday she became one of three Fed Cup colleagues to advance to the second round at Wimbledon.

Just as Andy Murray and James Ward were also booking their places in the second round of the men’s draw, Anne Keothavong was making it five British singles players into Round 2, but the first one to lead the home charge has now set the bar a little higher for the rest.

The 20-year-old from Guernsey had played at Wimbledon twice before as a wild card, but 2012 marked her first direct entry to the tournament. Her opponent was even newer to the event, though. Not only had Hampton not played at Wimbledon before but she had not played a grass court tournament before. However, she had shown growing pedigree this year by reaching a career-high 85 ranking after reaching the fourth round of Indian Wells, beating Jelena Jankovic in the process.

Hampton made sure to broadcast that quality in her first round here, too, by beating world No29, Daniela Hantuchova. Nevertheless she and Watson were now separated by only three places in the rankings, and Watson had the psychological edge of victory in their one meeting last year—not to mention a home crowd who, quite simply, love her to bits.

After her first match, Watson made it clear that she intended to go further:
“I’m very pleased with my first-round win, but I’m not satisfied with just a first round…I think winning these matches in the Slams is giving me more confidence, making me want to go deeper into the tournament, and I’m gaining a lot of experience and learning a lot from it.”

She was immediately true to her word. She opened serve strongly, broke Hampton and made another quick hold to 15. She was 3-0 in only eight minutes and earned yet more break points in the fourth game.

Hampton’s backhand failed to handle Watson’s heavy returns, and the American faced yet more break points in the fourth game, and a winning backhand down the line from Watson took the Briton to a 4-0 lead after a quarter of an hour.

It was little wonder that Hampton’s shoulders slumped, and despite threatening to break back in the fifth, her opponent was clearly in no mood to give anything up.

Full of bounce and moving beautifully, Watsoon held for a 5-0 lead, but now Hampton dug in, stringing together some consistent and deep baseline rallies to finally get on the scoreboard.

Nevertheless, Watson, watched by Fed Cup coach Judy Murray and a fast-filling Court 2, served out the set as the sultry noonday sun broke out. She had made only three errors to Hampton’s 15.

Watson opened just as boldly in the second set, a big forehand bringing up a first break point, and an error from Hampton conceded the break.

A clenched fist and a strident “C’mon” heralded a hold for a 2-0 lead from Watson, but Hampton continued to build on the rhythm she had begun to find at the end of the first set and broke back to level at 2-2.

Watson hit back with an immediate break, rounded off with a huge forehand onto the Hampton baseline. Then the American upped the pressure to take advantage of a Watson first serve that had begun to misfire. Hampton made a growing number of winners on return of serve and levelled again at 3-3.

A small—and possibly significant swing in momentum—seemed underway as Hampton reduced her errors and increased her winners, while Watson’s stats went in the other direction. Yet again, though, Watson broke, courtesy of a couple of over-ambitious volleys from an attacking Hampton.

And the rollercoaster continued. Hampton earned three break points as Watson also made errors at the net but, unlike the American, she pulled back to deuce. She faced one more break-point after a long back-hand cross-court exchange that went Hampton’s way, but that was it. Watson gained the advantage and eventually held the 5-3 lead.

Watson scampered and chased down drop-shots and lobs on Hampton’s serve to bring up a first match point with a stunning wrong-footing backhand but, in the end, Watson had to serve it out. Still full of bounce, she ran to her baseline to finish the job on the second of two more match points. The win was hers, 6-4.

The British crowd could barely contain their pleasure, something that Watson appreciated hugely: “I use it. I love it when the crowd brings a lot of energy and they clap. It gets me quite pumped and really motivated to win.”

She also revealed that she has taken deliberate steps to move up a gear in her game: “I’ve been known as kind of a counter puncher, good at moving and reading the game well, and I wanted to get to the next step, improve my game. If you want to get to the next level, you have to change things.

But that was not all. Watson looks fitter, faster and more focused than she was last year—all qualities that underpin that attacking game. Long may it last.