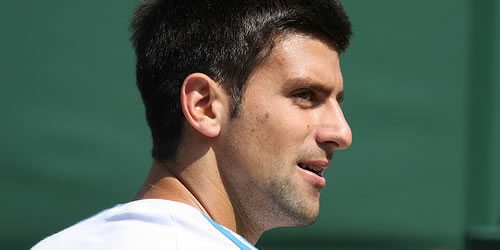 Novak Djokovic admitted he suffered from some first-round nerves on his way to a straight-sets victory over Juan Carlos Ferrero as he got his Wimbledon title defence off to a solid start.

Former world No1 Ferrero started well and broke Djokovic at the first time of asking – but the defending SW19 champion immediately broke back as he found his feet to wrap up the set 6-3.

The Serb then dominated proceedings as Ferrero squandered a number of break points, with Djokovic eventually sealing a 6-3 6-3 6-1 victory to book his place in the second round.

“I was nervous, it’s normal,” Djokovic told BBC Sport. “I haven’t played an official match on grass for 12 months so I’m really glad to be back here on Centre Court and after the [win] I feel much better.

“He’s never easy to play against on any surface. He showed his quality in the first two sets when it was very close. I played really well in the third and to win in straight sets against Ferrero is a good result.”

Djokovic admitted it was an honour to open the play on Centre Court as defending champion following his triumph over Rafael Nadal in last year’s final.

“It’s a first-time experience in my career,” he said. “The grass was untouched and it’s just a very special feeling. It’s different from stepping out onto any other court.

“This court has the longest history and just 12 months ago I won the title here. It was the biggest achievement in my career and I’m really glad to be playing well.”

Djokovic will face either American Ryan Harrison or Yen-Hsun Lu of China in the second round.