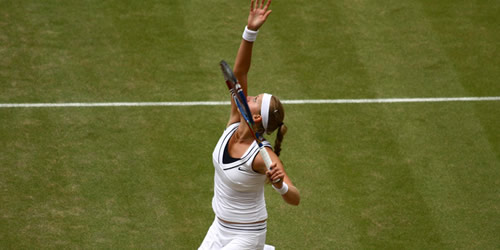 Defending champion Petra Kvitova bounced back from a difficult start to ease into the second round of Wimbledon with a 6-4 6-4 victory over Uzbekistan’s Akgul Amanmuradova.

The 22-year-old was broken in her opening service game by the world No96, before Amanmuradova raced into a 4-2 lead – but the fourth seed rallied to win five successive games and take the opening set in 36 minutes.

The Czech No1 continued to dominate, and despite an untimely rain delay in the second set, Kvitova kept her focus to seal a straight-sets victory and move into the next round, where she will face either Britain’s Elena Baltacha or Italian Karin Knapp.

“I was nervous,” said Kvitova afterwards. “It was first time for me to play as the defending champion of a Grand Slam. It was huge honour to come to the Centre Court.

“Of course I would like to make everyone happy, but it’s not that easy. There were a lot of ‘firsts’ for me today, but I’m happy that I stayed calm inside and didn’t panic on the important points.”

Kvitova beat current world No1 Maria Sharapova in straight sets at Wimbledon last year to win her first Major but she admitted it will be difficult to defend her title.

“For sure, it is [hard returning as defending champion],” added Kvitova. “As I said, it’s a huge honour for me. I’m glad that I won last year, and I played and won today.”