Marianne Bevis takes a look at the women's draw at Wimbledon, as Petra Kvitova prepares to defend her title 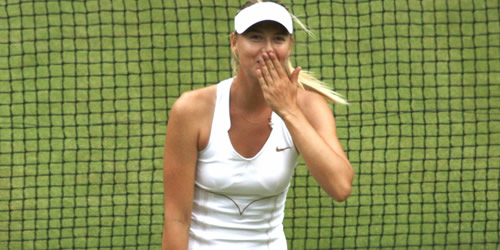 Kim Clijsters and Maria Sharapova are two of the most popular women not just in tennis but in sport across the board.

Both have been the best in the world at their trade, both have won four Grand Slam titles—and both have earned little short of $25m in prize money.

They are different in many ways: Sharapova is the catwalk model, tall, blond, willowy, perceived as cool, even aloof, when it comes to the soft side of the tennis business.

Clijsters is not tall by today’s tennis yardstick, has the prettiness of the girl next door rather than a Vogue cover girl, and the approachable friendliness of the girl-next-door, too.

And those physical differences have evolved into contrasting playing styles. The tall woman is full of hard-hitting, ruthless power but hindered by less-than-easy movement. The shorter one is famed for her flexibility, movement, and all-round shot-making.

Yet both their bodies have been cruel as well as kind. Each woman has missed tournaments, even seasons, with injury. Sharapova has admitted that she wondered whether she would ever make it back from her chronic shoulder problems, while Clijsters, in addition to injury time-outs, retired while world No4, married, had a daughter and, still only 26, returned to win the third tournament she played, the US Open.

Now, at Wimbledon in Olympic year, their paths could cross for only the ninth time in their decade on the tour: Sharapova’s soaring upwards with renewed success, Clijsters’ heading towards her career’s end.

For while Sharapova comes the London on the back of her first Grand Slam title in over four years and as last year’s runner-up, Clijsters has decided this will be her last attempt at winning the title that has eluded her since she played her first Major here in 1999.

It may seem fanciful to even consider Clijsters, currently ranked 53 in the world and with Wimbledon only her fifth tournament since Toronto last August, but she has twice been a semi-finalist and twice a quarter-finalist at the All England Club, and this week she reached the semis at the Unicef Open before pulling out to rest an abdominal strain. And of course, she pulled off that remarkable return to New York in 2009, and even briefly regained the No1 ranking early last year.

But while the title here would be a fairytale end for Clijsters, tennis’s evil spell has strewn the road to her Wimbledon ball with challenges. For a start, she is in Sharapova’s quarter, although the other most compelling claimants to the title are in the other half: four-time champion Serena Williams, defending champion Petra Kvitova and the dominant woman for most of this year, Victoria Azarenka.

So can Clijsters set up the dream quarter-final against Sharapova? Can No4 seed Agnieszka Radwanska take advantage of a half without her bête noire, Azarenka, and reach her first Major semi? Will Serena Williams and Kvitova reach their designated blockbuster quarter-final? And can Azarenka claim her second Major and reclaim the No1 ranking?

Sharapova, newly No1 and riding a wave of confidence from winning her first French Open and, with it, the complete set of four Slams, has a steady run-in for her Wimbledon campaign, and sees the biggest threats in her campaign in the bottom half: The woman who beat her in last year’s final, Kvitova, and the woman who has beaten her seven straight times, Serena Williams.

Sharapova’s opener is against the No133 ranked Anastasia Rodionova, her first seeded opponent should be No29 Monica Niculescu but her first serious challenge looks like last year’s semi-finalist Sabine Lisicki in the fourth round. The German, though, has lost in the opener of her last four tournaments and may even find herself struggling against her first opponent, the 42-ranked Petra Martic, who reached the fourth round at Roland Garros.

The real interest is focused on the bottom eighth, with Clijsters drawing another Grand Slam champion, Jelena Jankovic, in perhaps the opening match of the women’s draw.

The former French Open champion has only beaten Clijsters once in eight meetings, and lost in the first round at the Unicef Open this week. So Clijsters should survive, only to face the survivor of another classy opener between Vera Zvonareva and the rising talent of Mona Barthel. The Russian has struggled with form and injury this season, winning only seven of 14 matches, so the rangy game of Barthel could make the breakthrough.

Clijsters biggest hurdle if she is to make the quarters will be surging Angelique Kerber, at a career-high of No8 and improving all the time. She has just reached the final in Eastbourne, too.

Radwanska has a reasonably benign opener in Magdalena Rybarikova but finds herself against five-time Wimbledon champion Venus Williams in the next round, having faced the same draw in Paris a month ago. Radwanska beat her in straight sets, just as she did several weeks earlier in Miami.

For, despite her pedigree, Williams is still struggling with a debilitating virus, while the Polish woman is at her highest ever ranking and still, it seems, improving the slicing, tactical game that suits grass—she is twice a quarter-finalist at Wimbledon.

Radwanska’s first seed should be friend, Daniela Hantuchova, who has not beaten her since 2009. Then comes the formidable No20 seed Nadia Petrova, who has just won the Unicef Open and is a former quarter-finalist at Wimbledon. She seems likely to beat the clay-court talent of Flavia Pennetta to set up a tough fourth-round contest with Radwanska.

The bottom eighth boasts two Grand Slam champions in No5 seed Samantha Stosur and No11 Na Li. The former has had little success at Wimbledon while Li has twice been a quarter-finalist, so it may well be the latter who reaches the quarters—though Maria Kirilenko is a dangerous third-round opponent.

As Radwanska has lost twice to Stosur this year, she may hope it is Li she faces: They have spit their previous two meetings at Wimbledon.

The defending champion also has an easy opener against No96 Akgul Amanmuradova and could meet Briton Elena Baltacha in the second round.

Her first seed, Anastasia Pavlyuchenkova, has been in poor form this season so the first real test may come in the fourth round against Dominika Cibulkova—unless Francesca Schiavone finds the form that all but deserted her this year except in Strasbourg. Indeed there is a good chance that home favourite Laura Robson could take a big win in her opener against the veteran Italian.

Many will hope to see Kvitova reach the quarters for a rematch of two former meetings with Serena Williams: The American won both Grand Slam ties, both in 2010, one in the Wimbledon semis. Williams has not won a Major since that same tournament, missing the subsequent year with illness and injury and having a few more physical niggles this year, too.

Williams has a decent run to the quarters, giving her the chance to build up her form and fitness after a first-round exit in Paris. By chance, she could face the woman who took Paris by storm. Sara Errani lost in the final to Sharapova but is playing the best tennis of her life and could put up a strong fight in the fourth round.

The outstanding player of the opening months of 2012 was unbeaten until the quarter-finals of Miami, and then went on to reach the finals of Stuttgart and Madrid, losing to Sharapova and Williams respectively.

Azarenka’s quarter-final happens to line up against a woman who has beaten her in their last three matches, No7 Caroline Wozniacki, but the woman Azarenka supplanted at No1 after the Australian Open has lost some form this year. Her only final came in Copenhagen where she lost to Kerber.

She also lost her opening match in Eastbourne, and Wimbledon has been her least successful Slam. That Wozniacki faces Tamira Paszek in her first match simply makes matters worse: The Austrian has just won her first Premier event in Eastbourne, taking out three seeds on the way, and she reached the quarters here last year, too.

Wozniacki’s trials continue in the third round—potentially Grand Slam champion Svetlana Kuznetsova—and then Marion Bartoli, semi-finalist in Eastbourne, a runner-up in Wimbledon in 2007 and a quarter-finalist here last year.

Azarenka has a relatively smooth ride through to the quarter-finals. First up is American Irena Falconi, then clay-court specialist Anabel Medina Garrigues in the third and either Julia Goerges or Ana Ivanovic in the fourth.

The latter reached the semis at Wimbledon during her first career peak during 2007-8 and she has rediscovered some of her confidence this season. Her effectiveness may depend on how serious the hip problem is that made her withdraw from Eastbourne this week.