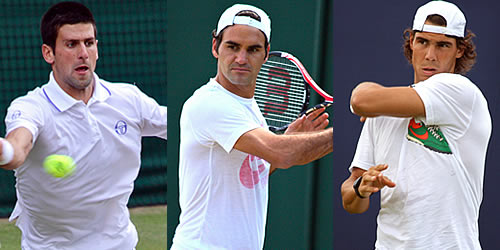 Once again, Wimbledon looks set to become the battleground for the race to be No1 in the world.

In 2011, Novak Djokovic won his first title at the All England Club and also took the No1 ranking for the first time. That he happened to beat in the final the man who would fall to No2, Rafael Nadal, made it an ‘I remember the day when…’ moment. Djokovic sank to his knees to pluck and eat a blade of the grass he had dreamed of conquering—and he has stayed clear of the competition ever since.

And yet now, as the man defending 2,000 points, he is the one to look over his shoulder at both Nadal and the current No3 Roger Federer. The Swiss, by falling in the quarters last year, has the most points of the three to gain and, should he win and Djokovic fail to reach the final, Federer would reclaim the No1 ranking—just as he had by winning the title in 2009.

It’s a scenario pregnant with significance. Federer has seen the last nine Slams go to his two rivals—a drought he has not suffered since winning his first at Wimbledon in 2003—and a break in that run would come at the tournament he loves the best. And returning to No1 would, at last, take him past Pete Sampras’s tally of 286 weeks.

But Nadal, too, has the chance to reclaim the No1 spot should he win the title—as long as Djokovic falls short of the semi-finals.

So three Wimbledon champions, three No1s, the top three ranked players in the world and winners of all the Grand Slam and Masters titles this year will play out their extraordinary rivalry just weeks ahead of the Olympics.

Then there is the plight of the fourth man, the home man, the one who has made up the final quartet in each of 2011’s Slams. Andy Murray will again try to shake off the burden of expectation that he has carried since he played his first Slam at Wimbledon in 2005. To do so, he knows he will most likely have to beat two of the three who have won 30 of the last 32 Grand Slams and, as if that was not bad enough, he faces what may be the toughest quarter of the draw.

If not Murray, though, is there another who can break up tennis’s triumvirate?

Once upon a time, drawing Juan Carlos Ferrero in the opening round of a tournament would have given cause for concern, and the former No1, now 32 years old, has enjoyed something of an Indian summer. But his four titles in the last two years have all come on clay, while Wimbledon has invariably proved a step too far. So Djokovic will not lose too much sleep to find the Spaniard as his first opponent.

A greater challenge may, in fact, come in the shape of 20-year-old Ryan Harrison who had a decent time on the North American hard courts and reached the semis at Eastbourne this week.

Djokovic’s first seed should be another veteran, Radek Stepanek, a quarter-finalist in Halle, followed by either Marcel Granollers or a resurgent Juan Monaco. The Argentine took a set from Djokovic in Rome and has notched up some decent wins during the season to take him to a career-high 14.

In truth, none of those in the Serb’s eighth should trouble him, whereas the man he may meet in the quarters, Tomas Berdych, has several potential trip-wires—though his first round against the hot-and-cold Ernests Gulbis should be entertaining rather than dangerous.

The Czech’s first seed is another hot-and-cold talent, Florian Mayer, who pushed Berdych hard in Miami last year. The German has the craft for grass but lacks the power of Berdych. More of a challenge is the Czech’s fourth round against No12 Nicolas Almagro. They matched each other game for game in the Australian Open this year and have split their two matches since.

As for the quarter-final against Djokovic, Berdcyh has lost all but one of their 10 meetings, but that one win came in the semis of Wimbledon in 2010. Berdych is in decent form: He should give the Serb a good fight.

Federer may need to have his wits about him in his opener against No43, Albert Ramos, a young Spaniard making some strong progress on the tour this season. He beat both Feliciano Lopez and Richard Gasquet on hard courts, reached his first tour final in Casablanca, and took a set from Berdych at the Australian Open. With some grass already under his feet from the final in Halle, though, Federer should quash any challenge.

His first seed should be Julien Benneteau, who beat him in their last match at the Paris Masters in 2009 and has reached a career high this season. In a French-packed section that also contains the stylish Michael Llodra, the fourth round holds No13 Gilles Simon—who has a 2-2 head-to-head with the Swiss—or No17 Fernando Verdasco, who has been recovering some of his form this year.

The other eighth pitches a dangerous John Isner, who broke the top 10 for the first time this season, against Andreas Seppi, another man enjoying his best-ever ranking. The Italian has some form on grass, winning Eastbourne last year and in this year’s final. He could be the second-round opponent of Briton Oliver Golding if the US Open junior champion gets past a difficult Igor Andreev.

Isner may have to survive a third-year-in-a-row meeting, this time in Round 2, against his record-breaking partner, Nicolas Mahut, but remains favourite to reach Round 4. There, he faces an interesting encounter either with Mikhail Youznhy, who reached the semis in Halle, or the section’s top seed, Janko Tipsarevic.

The Serb looked in good shape at The Boodles event this week, moving well and with some good all-court tactics, though his first problem is the Queen’s finalist, the richly-talented David Nalbandian.

Nicolay Davydenko is far from the player he was when he won the WTFs in 2009. Indeed it’s eight years since he last languished near the bottom of the top 50. But despite several first-round exits this year, he can still burn hot. He almost beat Federer in Rotterdam’s semis, having taken out Gasquet, he beat Isner in Nice and Ivo Karlovic on the fast courts of Madrid.

However he has rarely performed well at Wimbledon so Murray may breath a sigh of relief—until the second round, where the ace-demon Karlovic lurks. The Croat is second only to Milos Raonic in aces per match this year—talking of whom, the Canadian is a potential fourth-round opponent.

Before that, Round 3 holds the grass-loving young talent of Grigor Dimitrov, who reached his first tour semi at Queen’s last week by beating Kevin Anderson, who will be his first opponent next week. The South African beat Murray when they met in Montreal last year and took Berdych to five sets at Roland Garros.

Murray would avoid Raonic if Marin Cilic repeats his winning form from Queen’s—it’s a tricky fourth round either way. But the quarters hold Juan Martin del Potro, who is on a 37-9 win-loss run this season despite a sore knee at Roland Garros, or David Ferrer, on a 41-8 run.

The Spaniard beat Murray in the French Open and is a finalist at this week’s grass Unicef Open. None of which allows for Andy Roddick, a finalist in Eastbourne, trying to make an impact at the place he has been runner-up three times. He plays Briton Jamie Baker before heading to a possible third round against Ferrer.

Nadal’s quarter poses many questions and few answers. Just how strong will the champion of 10 years ago, Lleyton Hewitt, be when he opens against Jo-Wilfried Tsonga? Both men have, in the past, found some of their best form on London’s grass, with Tsonga reaching his first semi-final here last year.

In the other segment of their eighth, can the tall, talented teenager, Bernard Tomic, who last year became the youngest quarter-finalist since Boris Becker, build still further on the 120 ranking places he has climbed since then? And can his first-round opponent, David Goffin—who pulled off a similar run in Roland Garros this year and was rewarded with a wild-card for Wimbledon—build on that exciting performance?

The winner may find himself playing Mardy Fish, who has played only 13 matches this year and is playing his first tournament since early April. Can the American who ended 2011 on such a high hit the grass running after his recent health scare?

But all those questions will not affect Nadal until the quarter-finals. First he must contend with Tomaz Bellucci, who has a big left-handed game that, on the kind of day he had against Federer in Indian Wells, could test Nadal.

Then there is Ivan Dodig. He is another man who, on paper, is no problem except that he beat Nadal in Montreal last summer and had a great run in Queen’s last week. After that, he could face the winner between Philipp Kohlschreiber and Halle’s champion, Tommy Haas—currently playing some of his best tennis in years and a Wimbledon semi-finalist in 2009.

Beyond them lies Alexander Dolgopolov or Lopez—no slouch when it comes to Wimbledon and with a win on grass over Nadal in the past.

Nadal should negotiate all these traps, but it could be a very interesting ride.