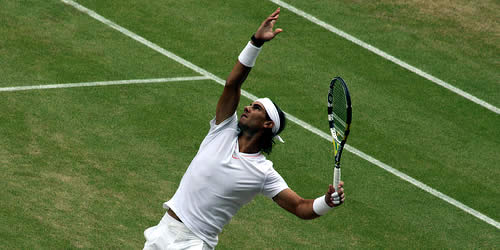 Rafael Nadal admitted he was far from his best after the Spaniard came from 4-0 down in the first set to eventually beat Thomaz Bellucci 7-6 6-2 6-3 at Wimbledon.

The Brazilian made an impressive start and raced into an early lead before the two-time champion at SW19 regrouped and won the opening set in a one-sided tiebreak.

Nadal, who beat Novak Djokovic to win his seventh French Open last month, continued to improve and secured the second set in 33 minutes, before completing the victory in the third to book a second-round meeting with Poland’s Lukas Rosol.

“I didn’t play my best match today,” said Nadal. “Especially at the start of the first set I played a little bit too nervous and I wasn’t sure exactly what to do. My movements were a little bit defensive.

“But I was able to win the first set. That’s the important thing and the good news. Then I started to play better. The second and third set I played better.

“I started to hit my forehand better. That’s the most important thing for me. At the beginning I didn’t really have the best feeling with my forehand.”

It was the first time the world No2 had trailed by such a big margin at the start of a match since his quarter-final meeting with Robin Soderling at the French Open in 2009 – he went on to lose to the Swede – but the Spaniard dismissed the comparison, insisting he needs time to adjust to the grass courts.

“It’s a completely different situation. Againt Soderling, it was in quarter-finals a few years ago. Here it is the first round. I just played two matches on grass this year before here. I need time. That’s an important victory for me.

“I need to keep improving. It’s going to be a difficult tournament, but I am here to try my best as I do every year and hopefully I can play a little bit better in the next round.

“The important thing and the best feeling for me is that I improved my game during the match.”