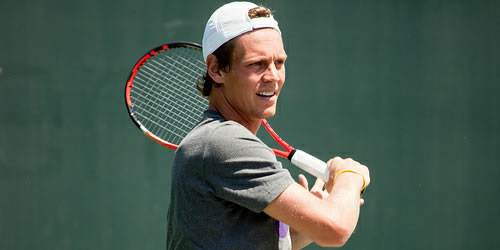 It was the men’s defending champion who opened on Centre Court on the first day of the 126th Championships at Wimbledon. Novak Djokovic made it look easy against former No1 Juan Carlos Ferrero for the loss of just seven games.

It was the six-time singles champion Roger Federer who drew the most enthusiastic reception on Court 1, and he made it look even easier. He dropped only three games in a net-rushing 80-minute trouncing of world No43, Albert Ramos.

Next came what looked like a formality as No6 seed and 2010 Wimbledon runner-up, Tomas Berdych, took on the streaky talent of Ernests Gulbis, a man who dropped to 87 last week after losing in the opening round of nine tournaments this year.

But it was on opening day in front of a Centre Court crowd that the Latvian found the kind of brilliance that beat Federer in his opener match in Rome two years ago.

Berdych is renowned for his big-hitting tennis but Gulbis brought out even bigger weaponry to produce an eye-watering 62 winners to just 30 from Berdych. He served up 30 aces to the Czech’s 13, and he routinely fired that formidable serve at over 130 mph—even his second serve peaked at 131.

So Djokovic may be buying the Gulbis a drink this evening: It was Berdych who beat him in the semis here in 2010.

Federer, too, may be buying a round for the man who almost took him out of Wimbledon on this very day in 2010.

Back then, Colombian Alejandro Falla shocked the Centre Court crowd by winning the first two sets against the defending champion. This year, in what looked to be the biggest upset of the day, he took out the dangerous No11 seed John Isner, depriving the American of a third meeting in successive years against Nicolas Mahut—his partner in the record-breaking 70-68 final-set marathon of 2010.

Isner threw away a one-set advantage against the 73rd-ranked Falla, saw the Columbian call the trainer in the fourth for a sore back, but eventually went down 7-5 in the fifth in a match dominated by serve and volley: 31 aces from Isner, 27 winning net points from Falla.

Isner is getting into a dangerous habit of playing long matches. He also went to five sets in more than five and a half hours in the second round of the French Open last month, losing 18-16 to Paul-Henri Mathieu.

The Frenchman, though, was forced to retire injured in the second set of his Wimbledon opener against No13 seed, Gilles Simon, as was Sergiy Stakhovsky against No28 seed, Radek Stepanek. Two more forced out by injury were Italians Filippo Volandri and Potitio Starace.

Federer not only saw Isner fall from his quarter of the draw but another danger man in the shape of David Nalbandian, though in truth, No8 seed Janko Tipsarevic was by far the superior player on this occasion. It took the Serb three straight sets and little more than two hours, playing some impressive all court tennis, to advance to play Ryan Sweeting in Round Two.

One more seed went by the board in five-sets, too. Viktor Troicki beat No24, Marcel Granollers, in the Djokovic eighth of the draw.

Rafael Nadal and Andy Murray will play their first matches on Centre Court tomorrow, while Jo-Wilfried Tsonga begins his campaigns on Court 1.

All three have difficult first opponents but all three should survive where Berdych and Isner did not.