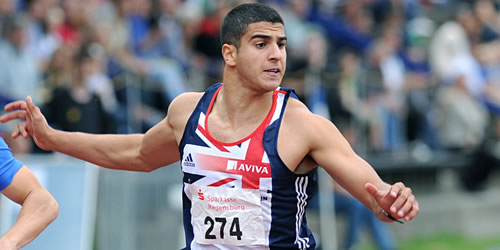 British sprint sensation Adam Gemili powered to an attention-grabbing 100m gold at the World Junior Championships in Barcelona on Wednesday.

Coach Michael Afilaka is keen his star charge makes a gradual transition into the senior ranks and he’ll arrive in London with a brief just to enjoy the experience.

But after a miserable season for British sprinting, he is certainly winning a growing fan base – incredible considering that this time last year he thought buying a ticket was the closest he’d get to the Games.

He even made a sluggish start to this final, lifting hopes he could become only the fourth British sprinter to dip below ten seconds on the biggest stage of all next month.

It is almost exactly 20 years since Linford Christie won Olympic gold at the Montjuic Stadium and two decades on and British sprinting’s new star followed his lead in the Catalan capital, finishing well ahead of American Aaron Ernest and Jamaica’s Odean Skeen, who won gold at the 2010 Youth Olympics in Singapore.

Gemili, the second British medallist at the event, following Emelia Gorecka’s 3,000m bronze, becomes only the fourth British sprinter to win the world junior title after Christian Malcolm, Mark Lewis-Francis and Harry Aikines-Aryeetey and the first for six years.

When asked if a sub-10 second time is on the cards at the Olympic Games, Gemili said: “I honestly do not know. I am feeling good and I am running well, I just feel there is a whole lot more to come.

“This is a massive stepping stone for the Olympics. If I had only made the final, it would have been a great achievement, to win makes it huge.

“I just told myself to stay relaxed and stay focused. I am not going to lie, I was nervous before the race: it’s a world junior final, it’s in this stadium in Barcelona, how can you not be nervous?

“But you need to use your nerves in a good way, try to use them to help you run and I did it.”

Elsewhere, Sophie Papps finished a promising sixth in women’s 100m while Emily Dudgeon and Jessica Judd both progressed to the 800m final.