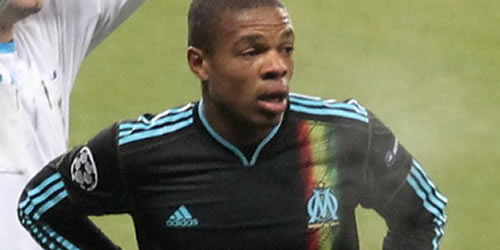 Loïc Remy has been linked with a move to the Premier League Photo: Amarhgil, via Wikimedia

Loïc Remy insists he is focused on preparing for another season at Marseille, despite reported interest from Arsenal and Tottenham Hotspur.

Remy, capped 17 times by Les Bleus, won the Ligue 1 title twice while at Lyon and has helped Marseille win the Coupe de France twice during his two seasons at the club.

The Marseille striker has been repeatedly linked with a move to the Premier League in recent months, and although Remy admits there is uncertainty surrounding his future, the striker is fully focused on pre-season training at Élie Baup’s side.

“For now, I am very proud to wear this shirt. It is not news that I could leave but we’ll see. I am preparing very well for a new season with my club,” Remy told Canal+.

Harry Redknapp, who was sacked by Tottenham at the end of the season, with Andre Villas-Boas named as the 65-year-old’s successor last week, had initially declared Spurs’ interest in the France striker during the January transfer window.

“He is a good player,” said Redknapp. “We could have had him a couple of years ago, to be honest with you.

“He has pushed on. He was a player we looked at and I watched him a couple of times at that stage, but he went to Marseille.

“There is interest there. But that is as far [as it goes]. At the moment, there is nothing more than that.”

Rodgers: Liverpool hoping to tie up ‘one or two’ transfer deals this week