Brendan Rodgers wants to keep Argentina international Maxi Rodríguez at Liverpool, despite interest from his homeland 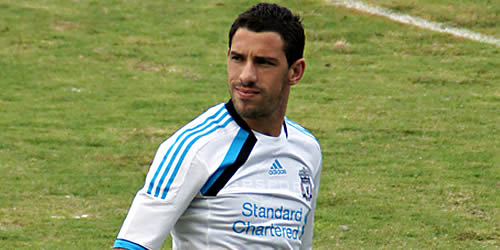 Brendan Rodgers has emphasised his desire to keep Maxi Rodríguez at Liverpool, despite reported interest from Newell’s Old Boys in Argentina.

The 31-year-old has scored 17 goals in 72 appearances for Liverpool since joining from Atletico Madrid on a free transfer in January 2010.

However, the Argentina international has struggled to secure a regular place in the Reds’ first-team, despite scoring an impressive 10 goals – including two hat-tricks – in the 2010-11 campaign.

The former Atletico captain had been linked with a return to the club where he started his career – Newell’s Old Boys – but new Liverpool boss Rodgers is keen to keep Rodríguez at Anfield.

“I have known about Maxi for a long time. He will understand 120 per cent about the way I want us to play,” Rodgers told Liverpool’s website.

“But sometimes there are issues that surround that – that’s what I am speaking to him about now. He doesn’t speak the language, it has been difficult for his family.

“If a player like him wanted to leave, it would not be because of the club. Sometimes it is just personal issues. I have had a couple of really good conversations with him. I know his thoughts and how he is thinking. It was a difficult season for him. He probably felt that he should have played more.

“We will hopefully see where he is at over the next couple of weeks and find a solution for him.

“But he would be a very good player for our squad.”