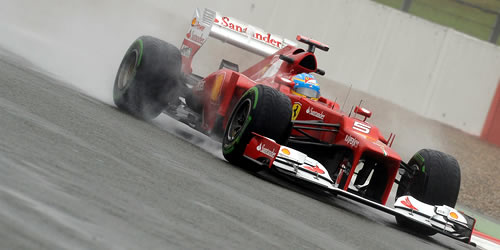 Fernando Alonso is the only driver to win two races this season Photo: Courtesy of Ferrari

Last year’s Silverstone winner and current drivers’ championship leader Alonso clocked a time of 1:32.167 at the British circuit as less than a second separated the top 10 drivers.

The Spaniard was fastest despite losing his front wing on Friday in a collision with the barriers and spinning earlier in this morning’s session.

McLaren were full of praise for their driver Button, who finished second-fastest, and who was told over the team radio that his last lap was “very good on a used set of option tyres”.

His team-mate Lewis Hamilton, who was quickest in Friday’s second practice session, was only a tenth of a second behind in sixth position.

There was a red flag inside 20 minutes as Marussia’s Charles Pic came to a stop on the exit of Becketts, and the driver’s bad luck continued as he stopped again with an electrical problem with four minutes of the practice remaining.

Nico Rosberg’s session also came to an early end after an oil leak meant the Mercedes engineers had to take the floor off his car.

Despite dry conditions on the track for practice three, Silverstone has already encountered difficulties this weekend as up to 30,000 ticket holders have been asked to stay away from Saturday’s qualifying session.

The heavy rainfall, which disrupted much of Friday’s practice sessions, has rendered the Silverstone car parks unusable, and officials said the decision was made to try and preserve the area for race itself.

“We need to be more prepared for British summers in future,” said Katie Tyler, Silverstone’s spokeswoman.

“We are genuinely upset. We are seriously sorry for the fans and are doing all we can to limit the impact [of flooded car parks].”

Up to 125,000 fans are expected for Saturday’s British Grand Prix.