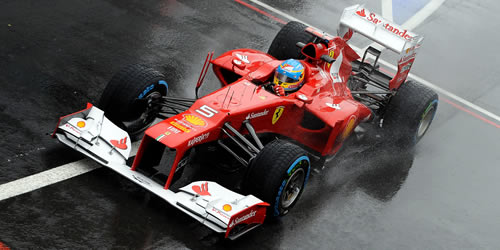 Alonso, who is leading the drivers’ championship, drove the fastest lap of one minute 51.746 to claim Ferrari’s first pole at Silverstone since 2003, and the Spaniard’s third at this track.

Webber will start from second on the grid, ahead of Mercedes’ Michael Schumacher and Sebastian Vettel in fourth.

“It was tricky conditions for everyone. You have to be calm in some difficult moments,” said Alonso, who secured his first pole in nearly two years.

“In Q2 we were on the red flag in positions 15 and 16, Felipe [Massa] and me. We went through and then in Q3 we had the difficult choice between inter and full wet. When we saw everyone on the inter, we relaxed a little and put a lap together.

“It was not easy. To complete a lap with no huge mistakes is not easy in these conditions. I’m happy to be on pole after nearly two years.

“In these conditions the qualifying is probably the least important of the year but obviously for visibility it is always better to be on pole.”

As with the weekend’s practice sessions, the changing weather dominated qualifying as the teams raced to set banker laps before the heavy rain arrived. 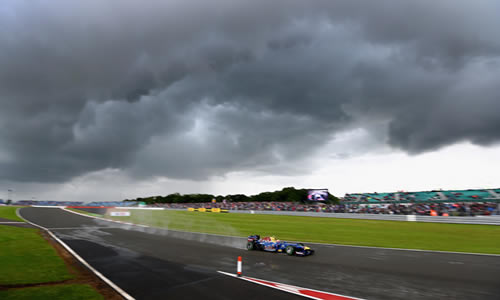 The first 10 minutes of Q1 saw all 24 cars out on the circuit, causing a near clash between Lotus team-mates Kimi Raikkonen and Romain Grosjean as they fought for space.

The red flags waved again in Q2 with six minutes to go as driving conditions worsened, and Schumacher found himself off the track four times in one lap, while Alonso took a big spin, almost hitting the wall as he lost the rear end of his Ferrari.

It took over 90 minutes of waiting at Silverstone before the rain had subsided enough for the cars to return the track.

Lotus driver Grosjean banked a lap time fast enough to make it into Q3 but a later slide on the wet track put him into the gravel trap and into 10th position.

McLaren’s Jenson Button had a torrid qualifying despite showing promising form in practice three – Button was 1.5 seconds up after two sectors on his final lap but a spin by Marussia’s Timo Glock brought out the yellow flags, causing Button to back off and go out in Q1.

But the 32-year-old remained upbeat despite starting near the back of the grid.

“Strangely enough we don’t get many tyres so maybe this isn’t a bad thing. You’ve got to take the positives because it was a very unlucky session,” Button said.

The British driver will start from 18th in front of his home crowd on Sunday, and McLaren team-mate Lewis Hamilton is positioned in eighth.