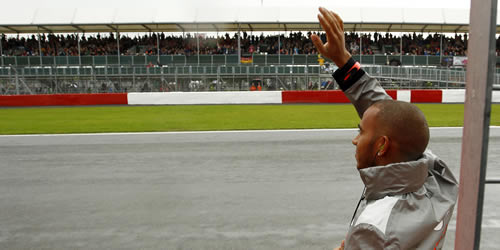 It is the third time Hamilton has been fastest in free practice two this season, after Lotus’ Romain Grosjean set the pace in the morning session.

After completing the most laps of anyone in the difficult conditions, Sauber’s Kamui Kobayashi was rewarded with a second-quickest time, 0.129 seconds behind Hamilton.

Despite record-breaking numbers of fans turning out to watch practice, the bad weather turned second session into a washout.

An early lap from Bruno Senna showed the conditions were too difficult early on and after clocking a 2:10.215, the Williams driver told his team there was no point continuing. The spectators were frustrated as no cars were out on track in the first half of practice. 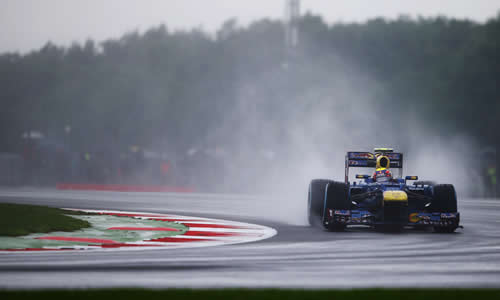 “I feel sorry for the fans out there because so many turned up but we have to save all the tyres we have as we don’t have spare tyres to waste,” said Hamilton as he went for a stroll down the pit lane during the rain break.

“I would like some more tyres personally, more so for the fans as there are so many today and it is boring for them to just sit there. They have paid a lot of money to be here so we should be putting on a show for them. It is constructive criticism, maybe we can do a little more on days like this.”

Despite a red flag when Bruno Senna crashed his Williams into the barriers, the fans did finally see some action in the last 15 minutes as the drivers struggled to stay on the soggy track.

Drivers’ championship leader Fernando Alonso hit the barriers on the final lap, breaking the front wing off his Ferrari while trying out the intermediate tyres.