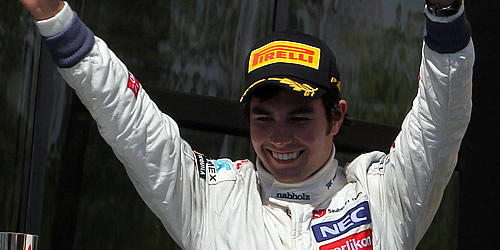 Sergio Perez believes overtaking at Silverstone in next Sunday’s British Grand Prix will be more of a challenge than in Valencia last weekend.

The Sauber driver, who already has two podium finishes under his belt this season, feels that the outcome of the Sunday’s race is likely to be mainly influenced by qualifying.

“In my view in Silverstone it is even more difficult to overtake than it was in Valencia, therefore qualifying is high priority on the job list,” he said. “I need a better grid position than recently.

“I like the fast and fluid corners a lot, so this is a very enjoyable part of the track.

“The race in Silverstone is a special Grand Prix – because of the fans and the atmosphere and also for me personally. I lived in Oxford for three years and I have quite a few friends in England.”

Perez impressed at the Canadian Grand Prix, when he drove through the field from 15th to seal third place in Montreal to clinch his second podium finish of 2011.

And the 22-year-old Mexican is now targeting another top-three spot in England – and claims the circuit suits his Sauber.

“I really like the Silverstone circuit,” he added. “I have won there in Formula 3 and in GP2 and also last year my first Formula 1 race was good.

“I came seventh and this was actually my best race result in 2011. Back then it was a crazy race in difficult weather conditions with the track drying.

“I think our car will be good in Silverstone and I want to fight for another podium there.”

London 2012: Gareth Bale ruled out of Olympics through injury