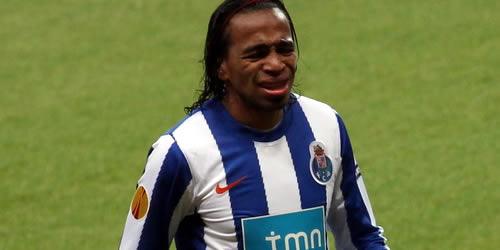 Alvaro Pereira has been linked with a move to Chelsea this summer Photo: Amarhgil, via Wikimedia

Alvaro Pereira is “not thinking of leaving” Porto despite reported interest from Chelsea, the Uruguay international’s agent has revealed.

The 26-year-old full-back has been heavily linked with a move to Stamford Bridge this summer but Napoli, Juventus and Paris Saint-Germain are all also said to be interested.

Pereira was thought to be close to joining the Blues last summer when Andre Villas-Boas took charge. Now, the Londoners are keen to find a replacement for Jose Bosingwa, who was released from his contract last month.

But Pereira’s representative Alexander Savich has moved to dampen speculation over a move to west London and claims it will be Porto who have the final say on his future.

“Many clubs in England and Italy have asked about his situation, the value of his release clause and if Porto would be willing to negotiate, but we are not negotiating with any club,” Alexander Savich told Portuguese radio station Radio Renascence.

“Alvaro is not thinking of leaving Porto because he has signed a contract. If there is an interesting offer, it will be Porto who decides.”

Pereira was earlier this week quoted as saying he does not know where his future lies. He told Sky Sport 24: “I do not know what will happen.”

“I’m still in South America and when I return to Portugal I have to talk with Porto to decide on my future. But for now I am player of Porto.”