All Out Cricket magazine catches up with Matthew Wade, one of Australian cricket’s most exciting players 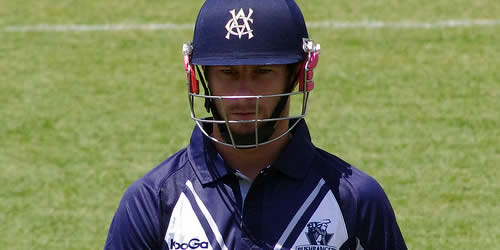 Matthew Wade’s a remarkable young man. Having been diagnosed with testicular cancer at the age of 16, he’s battled back through surgery and two bouts of chemotherapy to emerge as one of Australian cricket’s most exciting players.

It’s a reputation that he confirmed when he smashed a maiden Test century in the third Test between West Indies and Australia in Dominica – a knock so impressive that his skipper Michael Clarke stated he was good enough to play solely as a batsman.

Thanks to the good folks at PUMA, All Out Cricket magazine caught up with the Aussie keeper and quizzed him on what makes him tick, how he got started in the game and just how good Australia’s young pace attack can ultimately be.

How did you first get into cricket?

Honestly, I was into AFL football much more then cricket when I was younger, my dad was a good AFL player and most lads end up wanting to be good at what their dad does, don’t they? That’s a common theme in the Australian game really; cricket has lost a lot of talented players to AFL over the years. It wasn’t till I was about 14 or 15 and I got in a few representative squads and realised I had a bit of talent that I really got serious about it and thought ‘I’ve got to start having a real crack at this’.

Was there any one coach who played a big role in getting you more seriously involved with the game?

[Former Western Australia and Tasmania batsman and current Victoria and Delhi Daredevils coach] Greg Shipperd has had a huge influence on my career. I played in a lot of the same youth sides as his son while Greg was coaching Tasmania and he was willing to offer advice or a technical tweak or what have you. He eventually moved on to become coach of Victoria and when I turned 18 he signed me up and the relationship has just gone from there. He’s the man I generally go to if I’ve got an issue, and if he’s watching me on TV he’s not shy of sending me a text message telling me what I’m doing wrong…

Who were your cricketing idols growing up?

How about the rivalry with England, was it part of your life growing up?

My dad used to speak about it all the time and watch all the games, but I wasn’t a great watcher when I was really young, I was happier running around or chasing after a ball. But I always knew that Australia v England was the ultimate, the series that mattered most to your average Aussie fan. I guess I started really watching the game around 1993 and 1994, when Warne and McGrath came on the scene and Australia really started to dominate world cricket.

I think we’re ready to go and keen to show everyone we’re a pretty good side. Any team that has three or four blokes that can bowl serious pace is going to be dangerous – it’s just a case of putting it all together. England are a top side but if you look at it on paper both teams look pretty close – they have some great quicks and a world-class spinner – so we need to make sure we’re on our game. We’re proud of the fact that we’re currently ranked as the No.1 ODI team in the world and we want to stay there, but that means training like the No.1 side, playing like the No.1 side and finding that something that gets you over the line in tight games. It’s going to have to come from within, and hopefully we can find that.

We’ve heard a lot about the Australian pace attack – what can you tell us about them?

I think Pat Cummins is going to be something, he’s only 19 years of age and his pace is serious. He hits the gloves very hard and is really nasty to face because he naturally angles the ball in at the right-hander before getting the ball to straighten. James Pattinson’s a huge prospect as well – he’s more of a Brett Lee-type, he runs in hard, flings his bowling arm over really quick and gets the ball to shape away from the right-hander. He’s the sort of bowler who if there is swing to be had he’ll find it. Then you’ve got Brett Lee, who’s just world-class, still one of the best bowlers around, and Mitchell Johnson, who can swing it or bang it in. And that’s not even mentioning Clint McKay – it’s a great group of bowlers to be able to choose from. Let me tell you, batting in the nets can be a bit of a nightmare…

Your position in Australia’s one-day batting order seems to be pretty flexible. You’ve opened, you’ve come in down the order, but unlike others it doesn’t seem to affect your batting that much – why?

I think it’s just because I’m used to it. This is my sixth year for Victoria and in my first three years I batted at No.6 and No.7 while in my last three I’ve opened the batting, and I think that grounding has helped me a lot. I think it’s just about getting enough games under your belt to be comfortable in both positions. It’d be hard for someone who has opened throughout their career to then go to No.6 or vice versa, but I feel comfortable in both because I have played plenty of games in either position.

What precipitates the shift? Is it a question of allowing the hitter in form to face the most balls?

That might play more of a part of it in Twenty20, but I think generally it’s about using the players you have to balance the side. Hence I opened when Shane Watson wasn’t available, now Watson’s back I tend to drop down a little bit more, that’s just how it is. Watson’s one of the best cricketers in the world, and you’ve got David Warner there as well so there’s just not an opening spot available.

How easy is it to sacrifice that top spot?

I just like to think it’s good to be versatile enough to adapt to what the team needs. I think it can be an issue with certain players, but our mentality is we want to be the best team in the world for as long as we can, and that means doing what the team needs you to do. If I have to go out and do the job I will go out and do the job, I don’t tend to think about it too much and I’m not sure many players do – stuff like who should be batting where only generally becomes an issue when it’s beaten up in the media enough for people to start second guessing themselves. If you’re helping the team, generally players won’t care.

Yeah, he broke the mould! But Australia have had some great keepers though, even if you’re just talking within my lifetime. Ian Healy was an incredible gloveman, Brad Haddin is a very good cricketer and keeper. And that’s just the guy who played international cricket. I didn’t grow up following state cricket that much but from all reports and all the talk Darren Berry was amazing – one of the greatest keepers Victoria have ever had.