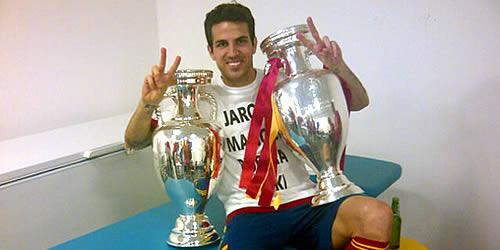 Cesc Fàbregas believes Spain can dominate international football for years to come after they became the first team to win three successive major tournaments with their Euro 2012 triumph.

The Barcelona midfielder helped send La Roja on their way to victory against Italy in Sunday’s final in Kiev, crossing for David Silva to net the opener after 14 minutes.

Jordi Alba then put Vicente Del Bosque’s men two up before the break – and substitutes Fernando Torres and Juan Mata added gloss to the scoreline in the closing stages.

And Fàbregas, who was part of the Spain side that won the European championship in 2008 and the World Cup in 2010, believes time is on their side.

“But it depends on us. We have to really behave properly, we have to want more and be hungry for success.

“Definitely this team has been showing that for the past four years and we have to keep going.

“Every year it will become more difficult because teams will want to beat us more, but we just want to enjoy tonight and then we will think about the Confederations Cup next season.”

The former Arsenal captain felt he and his team-mates had come under immense pressure from the media but was thrilled to “prove everybody wrong”.

“From our point of view it has been difficult because we have had a lot of pressure from the press, but once again this team proved everybody wrong and even we are impressed with what we have achieved,” he continued.

“I think we have impressed the world with our technical ability and tactically, because it is not just about going forward scoring goals.

“Defensively we have been very compact and strong, only conceding one goal and scoring 12. I don’t think that is a boring team.”