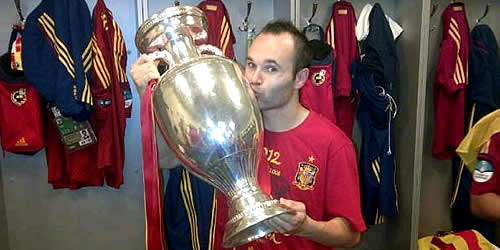 Spain midfielder Andres Iniesta has been named the Euro 2012 player of the tournament by Uefa.

Iniesta inherits the trophy from his team-mate Xavi, who was named the best player at Euro 2008.

Both players were vital to Spain winning back-to-back European championships, a feat no team has ever achieved before.

Although Iniesta did not score during the tournament, he was constant threat and at the heart of Spain’s creativity. In Sunday night’s 4-0 win over Italy in the final, Iniesta set Spain on their way to victory by providing the through ball to Cesc Fàbregas, who crossed for David Silva to open the scoring with a header.

He was named man of the match for the third time in the tournament for his performance in the final, an accolade he also won after Spain’s opening game of the tournament, the 1-1 draw with Italy, and their final group game, a 1-0 win over Croatia.

Beckham would have made Games exciting! Twitter reacts to GB squad