Tim Cahill is set for a shock £1m move to MLS side New York Red Bulls, with Everton supporters hailing the midfielder on Twitter 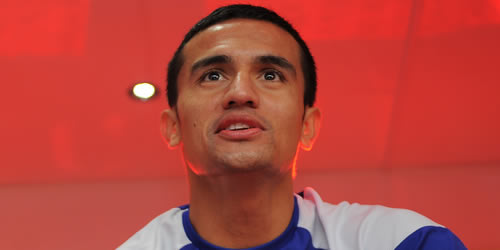 News of the Australia international’s probable departure prompted a flurry of Tweets online – and here are some that caught our eye.

Queens Park Rangers midfielder Joey Barton (‏@Joey7Barton) heaps praise on the Everton legend: “As a boyhood Evertonian, can I just wish @tim_cahill all the best in the MLS @ New York. A bargain for £1m. Top player and great competitor.”

Everton’s Jose Baxter ‏(@jbaxter_37) will miss Cahill: “Tim Cahill is a legend no matter what people say about trophies and etc. the man was a top player and a proper gentleman. Wish him luck.”

Hayden Jillions (‏@Hayden_Jillions) hails Cahill’s achievement in his spell at Everton: “Eight years ago today, @Tim_Cahill signed for @Everton. In that time he has 278 Appearances and 68 goals for the Blues. #Legend #EFC”

Erin McGuire ‏(@ErinMcGuire_10) reckons Cahill is still good enough for the Premier League: “Good luck to Tim Cahill in the MLS.. Another good player gone there that shouldn’t be there yet & should still be in the Premier League in my opinion.”

Rob White (‏@robbo123) says Cahill has been a top-class player for the Toffees: “@Tim_Cahill If the rumours are true about #nyredbull Then It has been a pleasure having you in the premier league – brilliant player #class”

But Karl Gibbs ‏(@KarlosGibbs) thinks Everton should have received a bigger transfer fee: “Can’t believe Everton have sold @Tim_Cahill to New York red bulks and for so little!! #TopPlayer”

Liverpool fan Ben Pitcairn (‏@BenPitcairn) won’t miss Cahill: “Can’t say I’m not glad to see the back of @Tim_Cahill, always seemed to be the difference against us! #allthebest”

And Rach (‏@liverbabygirl) thinks the prospect of Cahill playing alongside Thierry Henry is a tantalising one: “Just remembered Tim Cahill will be playing with Thierry Henry in New York….Not bad viewing if I say so myself!”

Aley Benno (‏@1999aley) describes Cahill as a true Everton legend: “@Tim_Cahill Timmy you’re one of the best players to ever grace Goodison, a legend and will always be remembered as the soul of Everton #legend!”

And finally, Patrick Easton (@PatEaston) says Cahill is one of his all-time favourites: “Gutted I’ll not be watching @Tim_Cahill on MOTD next season, one of my favourite premiership players of all time!”