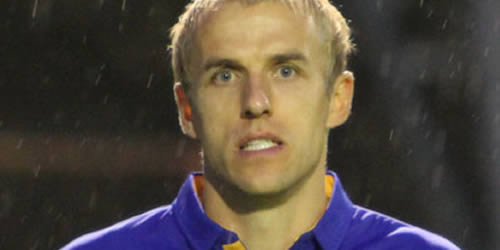 David Moyes made Phil Neville his captain in 2007 Photo: The Bohs, via Flickr

Phil Neville is aiming to extend his Premier League career with Everton for another two or three years as he prepares for his 19th season in the English top flight.

The 35-year-old joined the Toffees from Manchester United seven years ago after making 386 appearances for the Red Devils and winning the English title six times and the Champions League crown in 1999.

The former England international has been a mainstay of David Moyes’ first-team since moving to Goodison Park in 2005.

“I worked quite hard over the summer. I went on holiday but I trained at a facility for a couple for weeks,” Everton captain Neville told the club’s website.

“That is par for the course now. Particularly when you are getting older, you have to stay ahead of the game. At the clinics I went to over the summer to do my training I learned that age is just a number.

“I want to play football for as long as I possibly can: two, three more years hopefully at the top level. The way that science is improving now players can play for as long as they possibly can. I think it is your mind which goes before your body and once your mind goes you can’t make that back up.

“I’m quite a positive person. People say only look for this season but I am thinking, ‘Let’s look for another three years’. But I have to remain fit, strong and keep playing well to keep my position in the team.”

Brendan Rodgers would ‘love’ Craig Bellamy to stay at Liverpool

Tottenham’s Luka Modrić would be sorely missed by Premier League